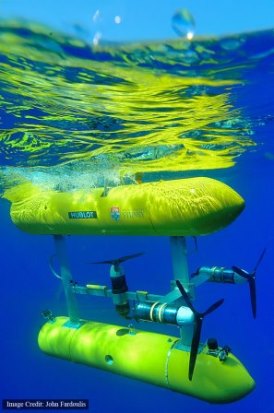 The University of Sydney will surround a reef with robotic eyes, to spy on the creatures that live there.

In a first of its kind study, an international research team will conduct a data-gathering expedition using coordinated groups of underwater robots.

The team, led by Dr. Oscar Pizarro from the University of Sydney 's Australian Centre for Field Robotics will visit Scott Reef, 400 kilometres north of Broome in the Timor Sea.

The remote site will be used as a testing ground for experiments aimed at expanding the electronic view of the seafloor and overlying waters.

The experts say they want to be able to leave groups of robotic vehicles unattended for long stretches of time for tasks such as detailed seafloor mapping and chemical analyses across wide areas.

This high-tech approach could reduce costs and the need for scientists to travel to these remote areas, while at the same time improving ocean exploration by increasing the amount of data collected.

The small robot army covers a variety of forms, including some that use solar power and others that rise and fall with wave action.

“The team’s ultimate vision is to be able to deploy complementary groups of vehicles to accomplish key tasks, that would allow a ship to move to another area for separate work,” Dr Pizarro said.

“The expedition will be in stark contrast to typical research cruises where opportunities for engineering experimentation and testing are rare.”