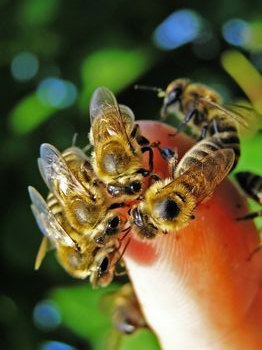 The decline of honeybee populations around the world is a cause for great concern, and researchers have just discovered another possible reason the vital bugs are dropping like flies.

A viral pathogen that typically infects plants has crossed to honeybees, according to the findings of teams working in the U.S. and Beijing, China.

The US Department of Agriculture’s research arm conducts routine checks for common and rare diseases in honeybee populations, check which this time; “resulted in the serendipitous detection of Tobacco Ringspot Virus, or TRSV, and prompted an investigation into whether this plant-infecting virus could also cause systemic infection in the bees,” says Agriculture Department researcher Yan Ping Chen.

“The results of our study provide the first evidence that honeybees exposed to virus-contaminated pollen can also be infected and that the infection becomes widespread in their bodies,” says lead author on a newly-published paper, Ji Lian Li, from the Chinese Academy of Agricultural Science.

It was previously known that about 5% of plant viruses are pollen-transmitted and thus potential sources of host-jumping viruses.

RNA viruses tend to be particularly dangerous because they lack a key proofreading function to edit out errors in replicated genomes. As a result, viruses such as TRSV generate a flood of variations with different ways of infecting their host.

Populations of RNA viruses are often thought to exist as ‘quasispecies’; clouds of genetically related variants that appear to work together to determine the pathology of their hosts.

The massive populations of virus variants and large swarms of bees mean adaptation can occur at light-speed.

“Thus, RNA viruses are a likely source of emerging and re-emerging infectious diseases," the researchers explained.

“The increasing prevalence of TRSV in conjunction with other bee viruses is associated with a gradual decline of host populations and supports the view that viral infections have a significant negative impact on colony survival,” the researchers concluded.

They have called for increased surveillance of potential host-jumping events, as an integrated part of insect pollination management programs.