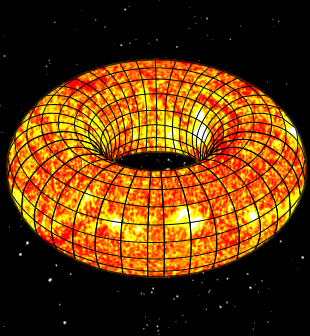 A new idea could bring nuclear fusion power even closer.

A ‘stellarator’ is a new kind of nuclear fusion device which confines and compresses gas into plasma – a high-energy state of matter with temperature approach that of the surface of the Sun - using magnetic fields.

Stellarators are shaped like a twisted doughnut, so that particles travelling around the ring move in three dimensions, rather than staying within a plane.

The stellarator design features some of the best plasma stability, meaning the plasma state can be held longer and used to generate more electricity.

But the shape of the magnets needed to generate the confining field is incredibly complex, and so the design remains less popular than its simpler, but less effective, predecessors.

Now, physicist Matt Landreman of the University of Maryland has come up with a new way to design the magnets for a stellarator.

He said the current approach is to start with the shape of the magnetic field and then work out coil geometries to produce this shape.

This often results in coils being placed too close together, limiting access to the plasma chamber within them, and making it difficult to maintain the machines or place sensors to monitor it.

A software package called NESCOIL (Neumann solver for fields produced by external coils) is currently used to design coil arrangements, but Landreman has now refined the protocol into a new version he calls regularised NESCOIL, or REGCOIL.

In a paper in the journal Nuclear Fusion, he shows how REGCOIL factors in the spacing between coils alongside the shaping of the magnetic field.

He says this produces a more robust stellarator design with more space between the coils.

“In mathematics, we’d call stellarator coil design an ‘ill-posed problem,’ meaning there are a lot of potential solutions. Finding the best solution is highly dependent on posing the problem in the right way,” Landreman said.

“REGCOIL does exactly that by simplifying coil shapes in a way that the problem can be solved very efficiently.”

But Landreman is keen to stress that stellarators are still in absolute infancy as an engineering design, and so any advances now are just as likely as not to end up in any commercial reactors.