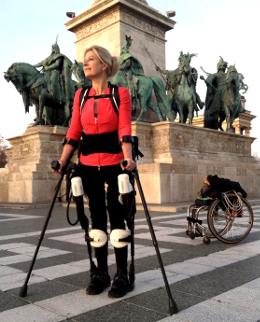 A successful test has shown the future for prosthetics, with a fully-customised exoskeleton allowing a paralysed skier to walk for the first time in over twenty years.

Researchers have developed the next generation of human exoskeleton, a wearable support device which allows or enhances human body movement.

A company called 3D Systems has used advanced scanning and 3D-printing techniques to create a bespoke suit for Amanda Boxtel, who was paralysed after a skiing incident in 1992.

After being told she would never walk again, Ms Boxtel’s exoskeleton has allowed her to stand and move on her own once more.

The powerful suit was designed from high-resolution 3D scans of Ms Boxtel’s body, which digitised the dimensions and contours of her spine, thighs, and shins, so that the robotic suit could be moulded specifically to her.

The suit was then embedded with a set of mechanical actuators and controls made by EksoBionics to create the incredible device.

EksoBionics have been marketing a range of powerful exoskeletons for some time, but they and 3D Systems say the combined design the two companies have created is superior to previous efforts.

The senior director for functional design at 3D Systems, Scott Summit, said there were safety advantages that come with a custom, 3D-printed design.

As paralysed patients can often cut or bruise themselves without ever knowing about it, it is imperative that the exoskeleton keep the wearer safe. Summit also says the tailored suit provides an improved range of motion.

“We had to be very specific with the design so we never had 3D-printed parts bumping into bony prominences, which can lead to abrasions,” he said.

“We had to be very careful with creating geometry that would dodge the parts of the body that it had to dodge...[and make] parts that wouldn't impede circulation or cause bruising.”

Mr Summit says the exoskeleton idea is based on the best possible bond between human and machine.

“When the robot becomes the enabling device to take every step for the rest of your life, the connection between the body and the robot is everything,” he said.

“So our goal is to enhance the quality of that connection so the robot becomes more symbiotic.”

More information is available in the following video, apologies for the poor sound editing standards: