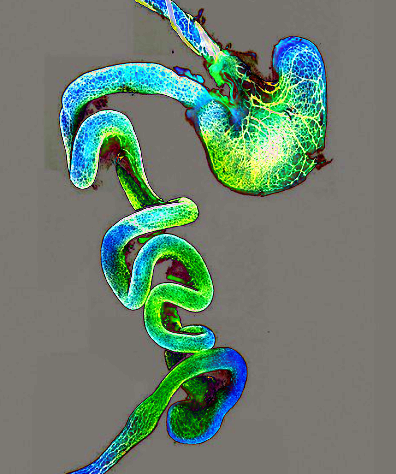 The human gut is known as the ‘second brain’, and scientists are discovering how it communicates.

The Enteric Nervous System (ENS) is an extensive network of neurons and transmitters wrapped in and around the human gut with the prime function of managing digestion, but Australian researchers are delving into the complexity of this brain like system to uncover its secret capabilities.

In a new study, Professor Nick Spencer’s laboratory has identified a particular type of neuron in the gut wall that communicates signals to other neurons outside the gut, near the spinal cord and up to the brain.

“There is significant interest in how the gut communicates with the brain as a major unresolved issue because of growing evidence that many diseases may first start in the gut and then travel to the brain, an example of which is Parkinson’s Disease,” says Professor Spencer.

“The new study has uncovered how viscerofugal neurons provide a pathway so our gut can ‘sense’ what is going on inside the gut wall, then relay this sensory information more dynamically than was previously assumed to other organs, like the spinal cord and brain which influence our decisions, mood and general wellbeing.”

The results reveal why the ENS might play an increasingly important part on human health, and could shed light on potential new treatments for conditions like Parkinson’s disease.

It is a big step towards understanding ENS functions and the complexity of the gut and brain connection through the neurons that allow communication in the body.

Professor Spencer says there is increasing interest in understanding how the nervous system in the gut (ENS) communicates with the brain, to give us all those sensations we know of.

“What is particularly exciting about the gut, is that it is unlike all other internal organs (e.g. heart, liver, bladder) because the gut has its own nervous system, which can function independently of the brain or spinal cord. Understanding how the gut communicates and controls other organs in the body can lead to important breakthroughs for disease treatment and this is an important step in the right direction.”