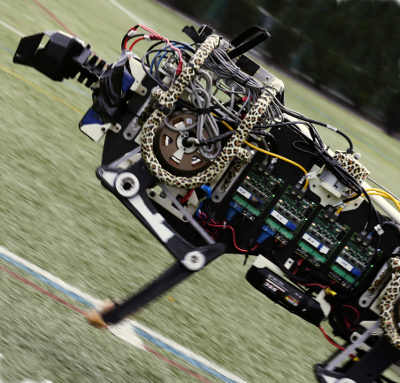 One of the US military’s futuristic creations has become untethered.

New footage has been released of the four-legged cheetah-inspired robot under development at MIT.

The project is backed by DARPA, the high-tech and secretive engineering research arm of the US Department of Defense.

In the new video, the cheetah robot is shown detecting and leaping over obstacles while running at a considerable clip.

It uses lidar scanning to reflect laser light off objects in its path, using the information to build up a 3D view.

Onboard computer algorithms estimate the height and distance to an oncoming obstacle, and allow the robot to adjust it trajectory in milliseconds, bounding over objects without breaking stride.

In the video below, the MIT team tests cheetah-bot on a treadmill, before setting it free on a track.

It successfully leapt over 70 per cent of the variously sized obstacles on the treadmill.

But just like its real life counterpart, the techno-cat was even better in the wild.

On an open track and unbound cables and tethers, the robot cleared about 90 per cent of hurdles, some up to half its own height.

The engineers say it preferred the more open surrounds, as it had more time to detect and clear the obstructions.

The version shown is capable of keeping up an average speed of about 8km/h, considerably less than the 120km/h sprints its biological cousin manages.

The cheetah will demonstrate its abilities at the DARPA Robotics Challenge later this week.

The Robotics Challenge will see 25 of the top robotics organisations in the world gather to compete for $3.5 million in prizes, as they attempt a simulated disaster-response course.

The competition was inspired by the response to Japan’s Fukushima disaster in 2011, according to program manager Dr Gill Pratt.

“The particular part that we've chosen to focus on, here, is technology for responding during the emergency part of the disaster during the first day or two,” Pratt said in a media briefing ahead of the competition.

“So this is not about, for instance, robotics for doing the restoration of the environment many, many weeks, years after the disaster, but rather the emergency response at the beginning.”

The DARPA rulebook says participating robots must face the following challenges without recharging and while operating remotely and untethered:

2. Get out of the vehicle

3. Open a door and travel through the opening

5. Use a cutting tool to cut a hole in a wall

7. Traverse rubble – Cross a debris field by moving the debris or traversing it