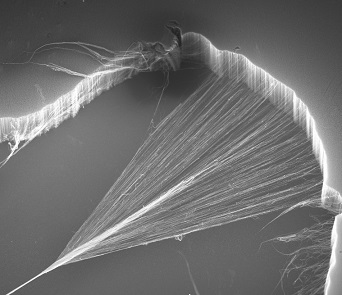 Another technology is being tried as a potential replacement for silicon in computer processors, with scientists creating a CPU made from carbon nanotubes.

New research also marks the most complex use of carbon nanotubes so far.

Nanotubes are the result of recent advances in materials science and hold many exciting future applications, especially in electronics. Their remarkable properties have now been applied to processing data with components many times smaller than the silicon transistors of current processors.

The carbon nanotube processor has been engineered at Standford University in the US, where researchers say that individual carbon nanotube transistors - smaller than 10 nanometres - are faster and more energy efficient than those made of any other material, including silicon.

The experimental device is made up of 142 transistors, each just a few nanometres long, which are used to operate a number of simple counting and sorting programs. Its capabilities are roughly equivalent to the Intel 4004, the company first microprocessor released in 1971.

There are a range of potential benefits to nanotubes over silicon. Theoretical work has suggested nanotubes could be exponentially more energy efficient and their ability to rapidly dissipate heat means they can run much faster without heating up – a crucial problem in current designs.

There are of course issues with the mostly-experimental technology; nanotubes are difficult to grow, must be straightened out as they grow in a tangled clump, and about one in three made by the current techniques would not be suitable for this application. The researchers behind the project say that these problems could be solved by better facilities and a bigger push to make nanotube processing happen.

A superb level of performance is most certainly possible through nanotubes, scientists say, but it will be some times before all the technologies are in place to build complex integrated circuits made up of pristine single nanotube transistors.

The journal article is accessible here.