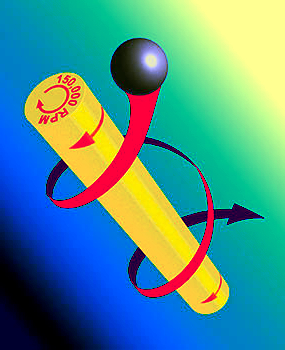 Certain nano-particles spin unbelievably fast when placed in water, nobody knows why, but they now know how fast.

Researchers have previously discovered that using ultrasound to vibrate a solution of rod-shaped metal nanoparticles in water makes them spin on their long axes like tiny drill bits.

Now, a team at the US National Institute of Standards and Technology (NIST) have clocked the spin, and it comes in at an incredible 150,000 revolutions per minute.

It means these nano-motors rotate 10 times faster than any liquid-submerged nanoscale object ever reported.

While there are no explicit uses for the dizzying devices, researchers say they could find a use moving things around inside the body, or for high-speed machining and mixing.

The spinning rods were first observed in a project looking at biologically-safe ways to propel nano-motors with ultrasound, back in 2012.

A separate research group at the University of California then found a way to direct the metal rods' forward motion using a magnetic field, demonstrating that the nano-motors could be propelled inside of a cancer cell.

But without the proper equipment to find out, no one knew how fast they were spinning.

“If nano-motors are to be used in a biological environment, then it is important to understand how they interact with the liquid and objects around them,” says NIST project leader Samuel Stavis.

“We used nanoparticles to trace the flow of water around the nano-motors, and we used that measurement to infer their rate of rotation. We found that the nano-motors were spinning surprisingly rapidly.”

The NIST team clocked the nano-motors’ rotation by mixing the 2-micrometre-long, 300-nanometre-wide gold rods with 400-nanometre-diameter polystyrene beads in water.

They were placed between glass and silicon plates with a speaker-like shaker beneath, which vibrated the shaker at an ultrasonic rate of 3 megahertz.

As the motors rotated in water, they created a vortex around them, which swept up and swirled the beads around them.

By measuring how far the beads are from the rods and how fast they move, the group was able to work out how quickly the motors were spinning, with an interesting result.

According to the researchers, the speed of the nano-motors' rotation seems to be independent of their forward motion.

They say being able to control the “speed and feed” of the nano-motors independently would enable them to be used as rotary tools for machining and mixing.

Future avenues of research include trying to discover exactly why the motors rotate, and what happens to the liquid around them.