Nano-device can drop drugs and see what happens 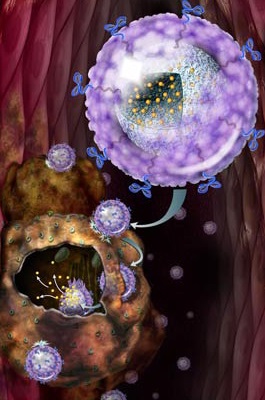 A new nanoparticle has been developed which can deliver cancer drugs to specific cells and then stick around to monitor their effect.

The two-phase approach is the result of efforts by chemical engineers from the University of New South Wales, who have synthesised a new iron oxide nanoparticle with incredible capabilities.

The development presents an important step forward in the emerging field of ‘theranostics’ – nanoparticles which can treat and diagnose disease.

“Iron oxide nanoparticles that can track drug delivery will provide the possibility to adapt treatments for individual patients,” says Associate Professor Cyrille Boyer from the UNSW School of Chemical Engineering.

With the enhanced ability to monitor a drug from the moment it is delivered, doctors could adjust the dosage to dial-in the best possible result. The feedback has been made possible by the use of a new technique called fluorescence lifetime imaging – employed to monitor the drug release inside a line of lung cancer cells.

“Usually, the drug release is determined using model experiments on the lab bench, but not in the cells,” says Boyer.

“This is significant as it allows us to determine the kinetic movement of drug release in a true biological environment.”

The technique comes from the related world of fluorescent identification, which uses magnetic iron oxide nanoparticles in an MRI machine. The new study has managed to load chemotherapy drugs onto the nanoparticle’s polymer surface, and demonstrated for the first time that the particles are delivering the drug inside the cells.

“This is very important because it shows that bench chemistry is working inside the cells,” says Boyer. “The next step in the research is to move to in-vivo applications.”

More information on the breakthrough in medical technology is available here.