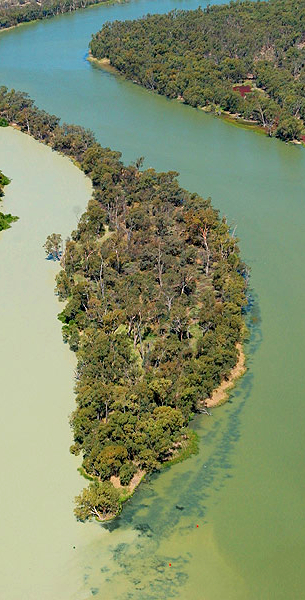 Researchers have wound back the clock to see what has happened to the Murray-Darling Basin system over the last 90,000 years.

The study has for the first time identified the sources of water in the Murray-Darling Basin during that time, including periods of floods and drought.

A research team from the Australian National University (ANU) studied a long, deep-sea core from near Kangaroo Island, opposite today’s mouth of the Murray River, to identify the geochemical composition of the sediment.

“The study explains what the basin was like during significant climatic changes, such as when small glaciers adorned the Snowy Mountains, and the very wet period when Lake Mungo was full of water and humans occupied its shores about 50,000 years ago,” Professor Patrick De Deckker said.

“We know that when Lake Eyre and adjacent bodies of water are full, rain usually comes from the northern part of Australia. But we didn’t know the source of the rain for the Willandra Lakes or the snow that was needed to maintain glaciers near Charlotte Pass about 20,000 years ago.”

Co-researcher Emeritus Fellow Dr Marc Norman from ANU said the team analysed two isotopes of neodymium to reveal the origin of sediment transported by the rivers.

“From about 90,000 years ago, the Murray sub-basin contributed to sediments deposited at sea and that progressively changed to a Darling sub-basin influence that prevailed from about 70,000 years ago,” said Dr Norman.

He said rainfall in the Murray sub-basin came from the south, generally in winter, while the Darling sub-basin usually received waters from the north via monsoonal rains, mostly in summer.

“Since the deglaciation that began about 18,000 years ago, the sediments transported to sea display a change from a northern influence to a southern influence,” Dr Norman said.

“Our research emphasises the importance of using water from the Murray-Darling Basin with extreme care, because less and less water is going through the system,” he said.

“In recent years, both the Murray and Darling rivers and many of their confluents have been altered by human activities, especially damming, irrigation and vegetation clearance.”

The study has been published in Scientific Reports.