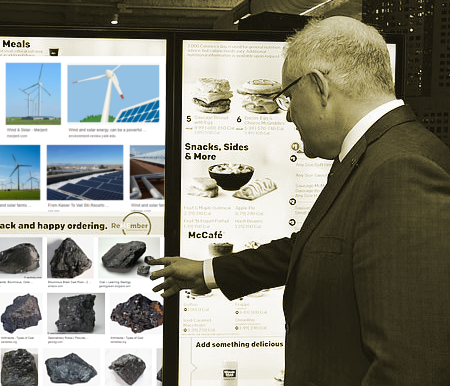 While the global diplomatic community descended on New York for the annual UN General Assembly, Mr Morrison was in the same country, but a different city.

The Prime Minister was in Chicago speaking about foreign policy and visiting an innovation hub. He took time to marvel at McDonald's new “smart Drive-Thru technology” among other things.

The meeting was on a week after UN announced that countries such as Australia, the US and Japan were not invited to speak.

They were left on the sidelines because they were not prepared to announce more ambitious emission reduction targets or reduce their dependence on fossil fuels.

“Only the boldest and most transformative actions make the stage,” a UN official said.

Mr Morrison said he was glad to be appearing before the Chicago Council on Global Affairs, rather than the UN.

“New York: there’s a lot of people there this week and so I had the opportunity here to speak through a different channel,” he said.

In his speech, the PM challenged China to do more heavy lifting on climate change, saying it should be treated as a “newly developed” economy rather than a developing one.

Meanwhile, Swedish campaigner Greta Thunberg made a passionate speech to world leaders,  accusing them of failing to act on climate change.

“You know, I want children growing up in Australia that feel positive about their future,” Mr Morrison said.

“And I think it's important that we give them that confidence, that they will not only have a wonderful country and pristine environment to live in, but they'll also have an economy that they can live in as well.

“Yes, we've got to deal with the policy issues and we've got to take it seriously, but I don't want our children having anxieties about these issues.

“I say this as a parent, too: we've got to make sure that our kids understand the facts, but they also have the context and the perspective, and that we do not create an anxiety among children in how we talk about and deal with these very real issues.”

Analysts and former diplomats say Australia is seen as a climate ‘denialist’ on the global stage.

“When you have a prime minister of the country not stepping up to the plate, addressing the world’s forum, and indicating what Australia’s future carbon reduction commitments will be, it sends a very clear message to the Australian domestic community and the international community that the Australian government is just not serious,” former Australian prime minister Kevin Rudd said.