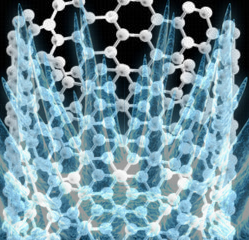 MIT engineers have made water freeze at a temperature that would normally boil it.

Inside the tiniest of spaces - within carbon nanotubes whose inner dimensions are not much bigger than a few water molecules – the team got water to freeze solid at well over 105°C.

The discovery illustrates how even very familiar materials can drastically change their behaviour when trapped inside nano-structures.

It appears that if a fluid is confined to a nano-cavity, its phase behaviour (how and when the substance changes between solid, liquid, and gas phases) can change.

Such effects were expected, but the enormous magnitude of the change, and its direction (raising rather than lowering the freezing point), were a complete surprise.

In one of the team's tests, the water solidified at temperatures of between 105°C and 151°C.

The experts are hoping their finding will lead to new applications - such as, essentially, ice-filled wires which take advantage of the unique electrical and thermal properties of ice while remaining stable at room temperature.

They found that the way water's behaviour changes inside the tiny carbon nanotubes depends crucially on the exact diameter of the tubes. Even the difference between nanotubes 1.05 nanometres and 1.06 nanometres across made a difference of tens of degrees in the apparent freezing point.

In fact, it is surprising that water even enters into these tiny tubes in the first place, MIT chemical engineer Michael Strano says.

“Carbon nanotubes are thought to be hydrophobic, or water-repelling, so water molecules should have a hard time getting inside. The fact that they do gain entry remains a bit of a mystery,” he said.

Strano and his team used highly sensitive ‘vibrational spectroscopy’ to track the movement of water inside the nanotubes, making a detailed measurement of its behaviour for the first time on this scale.

While the water definitely goes into a solid phase, the team avoids calling it “ice” because that term implies a certain kind of crystalline structure, which they have not yet been able to show conclusively exists in these confined spaces.

“It's not necessarily ice, but it's an ice-like phase,” Strano says.

Because the solid water does not melt until well above the normal boiling point of water, it should remain perfectly stable indefinitely under room-temperature conditions.

That makes it potentially a useful material for a variety of possible applications, he says. For example, it should be possible to make ‘ice wires’ that would be among the best carriers known for protons, because water conducts protons at least 10 times more readily than typical conductive materials.