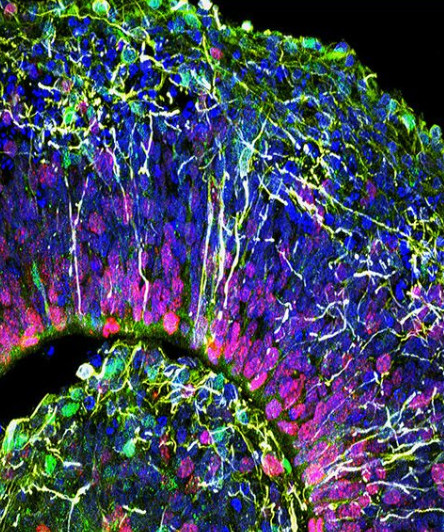 US scientists have shown activity in lab-grown mini-brains for the first time.

Scientists have been able to grow miniature brains from stem cells for several years, and have now developed functional neural networks within them.

Despite being a million times smaller than human brains, the lab-grown brains are producing brain waves that resemble those of preterm babies.

“The level of neural activity we are seeing is unprecedented in vitro,” says biologist Alysson Muotri from the University of California, San Diego.

“We are one step closer to have a model that can actually generate these early stages of a sophisticated neural network.”

By putting them in culture that mimics the environment of brain development, the stem cells differentiate into different types of brain cells and self-organize into a 3D structure resembling the developing human brain.

Scientists have successfully grown organoids with cellular structures similar to those of human brains.

However, none of the previous models developed human-like functional neural networks. Networks appear when neurons are mature and become interconnected, and they are essential for most brain activities.

The team grew hundreds of organoids for 10 months and used multi-electrode arrays to monitor their neural activities.

The team began to detect bursts of brain waves from organoids at about two months.

The signals were sparse and had the same frequency, a pattern seen in very immature human brains.

As the organoids continued to grow, they produced brain waves at different frequencies, and the signals appeared more regularly. This suggests the organoids have further developed their neural networks.

“This is a result of having more functional synapses, and you are forming more connections between the neurons,” Dr Muotri says. The interactions between neurons contribute to signals at various frequencies.

However, it is not likely these organoids have mental activities, such as consciousness.

“The organoid is still a very rudimentary model - we don't have other brain parts and structures. So these brain waves might not have anything to do with activities in real brains,” she said.

“It might be that in the future, we will get something that is really close to the signals in the human brains that control behaviours, thoughts, or memory … but I don't think we have any evidence right now to say we have any of those.”