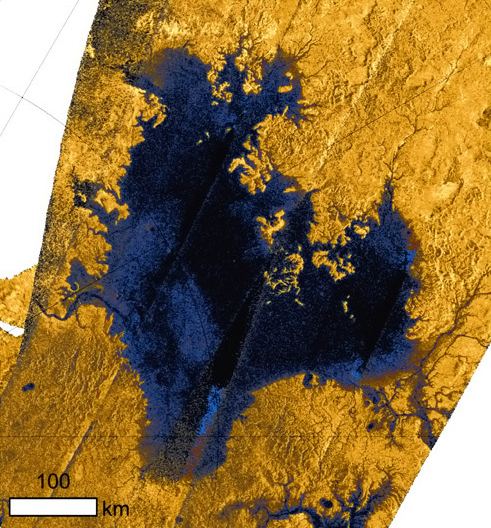 New pictures have been published of a wild and toxic lake system, filled with methane and other hydrocarbons, but authorities say there is nothing to worry about.

The images were taken by the international Cassini mission, which is investigating just what forms the depressions that mark the surface on Titan.

Scientists already have a good idea as to why the lakes are filled with hydrocarbons – a symptom of the fact that it rains liquid methane and a -180C climate.

But the origins of the depressions are less obvious, and Cassini has been sent to work it out.

A team of scientists have turned to home for the answer, discovering that Titan’s lakes are just like ‘karstic’ landforms seen on Earth.

These are terrestrial landscapes that result from erosion of soluble rocks such as limestone and gypsum in groundwater and rainfall percolating through rocks.

Over time, this leads to features including sinkholes and caves under humid climates, and salt-pans under more arid climates.

The rate of erosion depends on factors such as the chemistry of the rocks, the rainfall rate and the surface temperature.

While all of these aspects clearly differ between Titan and Earth, the team says the underlying processes appear surprisingly similar.

More details on the mission to demystify the lakes are available here.