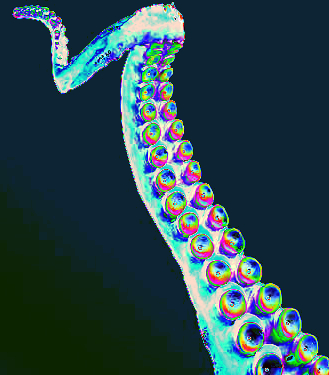 Researchers have found out what happens when an octopus takes MDMA.

Generally, the octopus is a solitary and asocial creature.

MDMA, a drug popularly known as ecstasy, is taken by humans to experience a rush of serotonin, dopamine, and oxytocin, producing feelings of emotional closeness, euphoria and connection.

It turns out that octopuses respond to MDMA in a similar manner: by becoming much more interested than usual in engaging with one other.

The finding is particularly striking, given the differences in human and octopus biology.

Octopus and human lineages are separated by more than 500 million years of evolution, and yet their genomic analyses showed that the eight-limbed O.bimaculoides has the serotonin transporter gene known to serve as the principle binding site of MDMA.

The findings add to evidence that ancient neurotransmitter systems are shared across vertebrate and invertebrate species.

The discovery also suggested that the octopuses had the molecular components needed to sense and potentially respond to MDMA.

The researchers tested the octopuses' interest in other octopuses compared to novel objects under normal circumstances.

Those studies showed the octopuses actually do have more interest in each other, and particularly in other females, than had often been thought.

Next, they tested the octopuses' interest in each other again while under the influence of MDMA.

Surprisingly, the octopuses not only spent more time with other octopus individuals (including other males) while on the drug, but they also engaged in extensive ventral surface contact.

That unusual physical contact between individuals appeared exploratory, not aggressive, in nature.

The findings show that despite being evolutionarily distant from invertebrate species like octopuses, humans share a common evolutionary heritage that enables serotonin to encode social behaviours, the researchers say.

They add that the octopuses may rely on common pathways to behave socially at certain times, such as during mating season.

The researchers are now in the process of sequencing the genomes of two other species of octopus, which are closely related to each other but differ in their behaviours. By comparing the genomes of those species, they hope to gain more insight into the evolution of social behaviour.