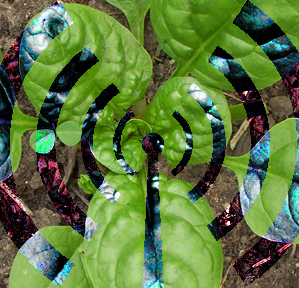 Researchers in the US gave spinach leaves new functions by adding nanoparticles that can detect nitroaromatic molecules like TNT.

The plants employ a pair of near-infrared fluorescent nanosensors - single-walled carbon nanotubes (SWCNTs) that are bonded to the peptide Bombolitin II.

The nanotube sensors recognise ‘nitroaromatics’ via infrared fluorescent emission, with polyvinyl-alcohol functionalized nanotubes that act as an reference signal.

Plants continually draw up water and nutrients from the soil using their roots, but contaminants in the groundwater are often taken into the plant as well.

The nanoparticles in the leaves act as sensors, and fluoresce different amounts based on how much of the contaminant is present.

Because this fluorescence is infra-red, it can be recorded by smartphones, creating wireless real-time chemical monitoring.

The embedded sensors allow real-time monitoring of contaminants in the roots, stems and leaves to be estimated.

According to researchers from MIT who led the study, by modifying the molecule attached to the nanoparticles, the sensors can be adapted for different contaminants.