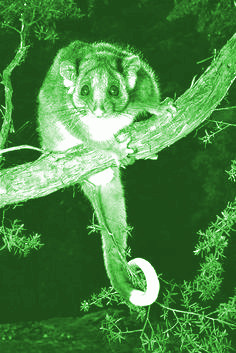 The latest update of The IUCN Red List of Threatened Species reveals that a drying climate is pushing the Ringtail Possum to the brink of extinction.

Three reptile species found only on Australia’s Christmas Island - the Whiptail-skink, the Blue-tailed Skink (Cryptoblepharus egeriae) and the Lister’s Gecko - have gone extinct, according to the update.

But, in a rare bit of good news, conservation efforts in New Zealand have improved the situation for two species of Kiwi.

Australia’s increasingly dry and hot climate has led to a dramatic decline of the Western Ringtail Possum (Pseudocheirus occidentalis), which has moved from ‘Vulnerable’ to ‘Critically Endangered’ on the list, due to a fall in species numbers by over 80 per cent in the past ten years.

The possum was once widespread in peppermint and tuart forests in Western Australia, but is now limited to fragmented coastal habitats.

Attempts to re-establish the species in Lane-Poole Conservation Park, about 100 km south of Perth, have failed largely due to poor food quality resulting from a drying climate.

The Western Ringtail Possum is also very susceptible to heat stress and can overheat at temperatures above 35ºC, increasingly common in this part of Australia.

Possum numbers have been impacted by urban development and predation from foxes and feral cats, logging, fire outbreaks and inappropriate fire management regimes as well.

Overall, populations of Christmas Island reptiles have declined rapidly since the 1970s. While the reason for their decline remains unclear, predation by the invasive Wolf Snake (Lycodon capucinus), introduced to the island in the mid-1980s may be to blame.

Efforts to establish a captive breeding programme for the Forest Skink failed in 2013 and the species has now been moved from ‘Critically Endangered’ to ‘Extinct’.

Although captive breeding populations are now well-established for the Lister’s Gecko and the Blue-tailed Skink, both species have been declared ‘Extinct’ in the Wild.

Island populations of endemic species are particularly susceptible to decline due to their small populations, limited genetic diversity, lack of immunity to novel diseases and naivety towards introduced predators, according to the Red List.

However, intensive predator control on small New Zealand islands has led to the re-categorisation of the Okarito Kiwi (Apteryx rowi) and the Northern Brown Kiwi (Apteryx mantelli) from ‘Endangered’ up to ‘Vulnerable’, according to the Red List update.

Both species of Kiwi have suffered under habitat loss and predation by introduced mammals, such as stoats (Mustela erminea) and feral cats. The Northern Brown Kiwi is also threatened by predation from ferrets (Mustela furo) and dogs.

Government and community conservation efforts have focused on predator control, and removing and incubating eggs for release into the wild.

Overall, Northern Brown Kiwi populations are estimated to be growing by over 2 per cent per annum, although unmanaged populations continue to decline.

The re-categorisation of the Kiwis forms part of a wider assessment of New Zealand birds, which highlights that many endemic species are in decline, often as a result of invasive species.

A full set of summary statistics are accessible here.