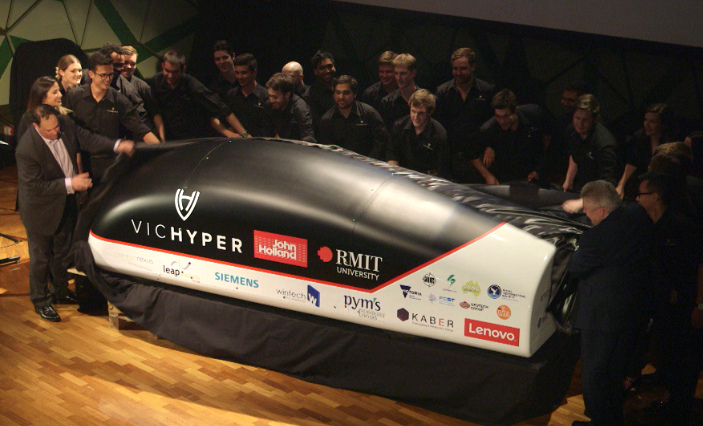 The Hyperloop project seeks to redefine high-speed ground transportation, with the ability to transport both people and cargo at the speed of sound (1200 km/h).

But the design and engineering of several components, including the pods people will travel in, have been put to the masses.

RMIT’s VicHyper team are the only finalists from the Southern Hemisphere to be selected from more than 1700 global entries to compete in the final 30 and accelerate the development of Hyperloop technologies.

VicHyper designed and constructed a functional Hyperloop pod prototype to compete as finalists at the SpaceX Hyperloop Competition Weekend in California in January 2017.

Placing Australian ingenuity on the world stage alongside Stanford, MIT and Delft universities, VicHyper will be the first team in the world to operate a Linear Induction Motor within a vacuum.

The pod is designed to travel within an elevated tube network held at a near vacuum utilising magnetic levitation.

The RMIT team is made up of students with expertise spanning aerospace, electrical and mechanical engineering, industrial design, communications and graphic design.

VicHyper won the Braking Subsystem Technical Excellence Award at the semi-finals SpaceX Pod Design Weekend in Texas this year, and has recently been awarded the Highly Commended certificate at the #TechDiversity Awards.