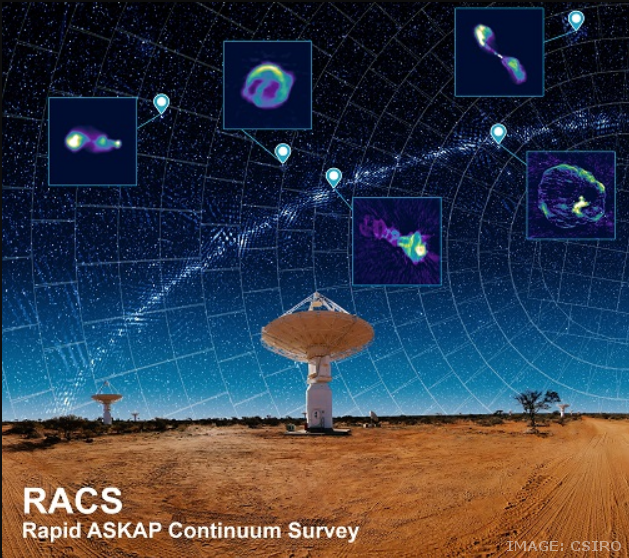 An Australian telescope has scanned over 3 million galaxies to create a new atlas of the Universe.

The Rapid ASKAP Continuum Survey is like a Google map of the Universe, where most of the millions of star-like points on the map are distant galaxies – about a million of which humans had never seen before.

The telescope’s key feature is its wide field of view, generated by new receivers, that enable ASKAP to take panoramic pictures of the sky in amazing detail.

The initial results have been published in the Publications of the Astronomical Society of Australia.

This record-breaking result proves that an all-sky survey can be done in weeks rather than years, opening new opportunities for discovery.

The new data will enable astronomers to undertake statistical analyses of large populations of galaxies, in the same way social researchers use information from a national census.

“This census of the Universe will be used by astronomers around the world to explore the unknown and study everything from star formation to how galaxies and their super-massive black holes evolve and interact,” lead author and CSIRO astronomer Dr David McConnell said.

With ASKAP’s advanced receivers the RACS team only needed to combine 903 images to form the full map of the sky, significantly less than the tens of thousands of images needed for earlier all-sky radio surveys conducted by major world telescopes.

“For the first time ASKAP has flexed its full muscles, building a map of the Universe in greater detail than ever before, and at record speed,” Dr McConnell said.

“We expect to find tens of millions of new galaxies in future surveys.”

The 13.5 exabytes of raw data generated by ASKAP were processed using hardware and software custom-built by CSIRO.

The final 903 images and supporting information amount to 26 terabytes of data.

ASKAP’s advanced technologies are providing insights for the development of the Square Kilometre Array (SKA), an international mega-science project to build the world’s largest radio telescopes.