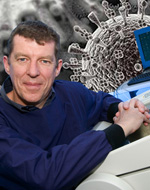 Australia’s Professor Ian Frazer has won a prestigious international award for his work on the world's first vaccine against cervical cancer, Gardasil.

The Former Australian of the Year won the European Inventor Award in conjunction his late Chinese colleague Jian Zhou.

The award is handed out annually by the European Patent Office, and is considered the Oscar of the research world.

There are five categories for the awards, with winners chosen by a scientific panel.

Professors Frazer and Zhou picked up the popular prize category, which is voted-on by members of the public around the world.

“Developing a vaccine has saved countless lives and also saved many women from a protracted and painful course of treatment, involving surgery and chemotherapy,” he said.

“The award shows how grateful people are to Ian Frazer and Jian Zhou for this pioneering invention.

Professor Frazer said it was great to see Australian innovation on the international stage.

“And shows that Australia has an impact in health on the world stage.”