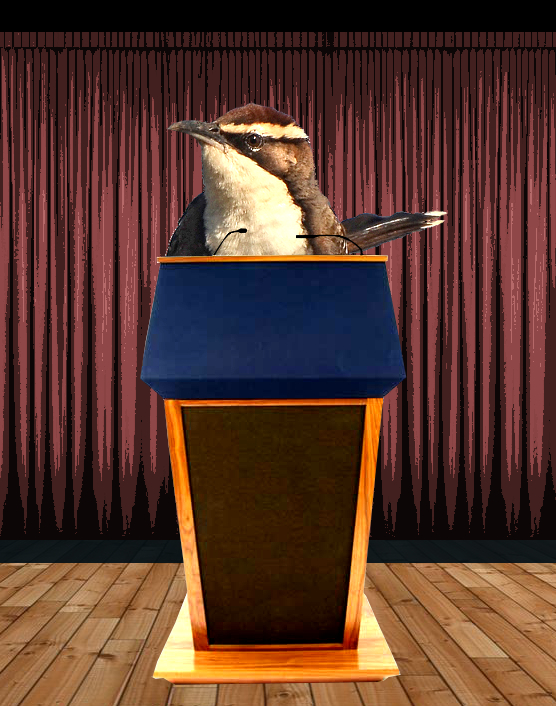 A small Australian native bird has become the first species other than humans to be observed communicating in a simple form of language.

Researchers looking at the vocal noises of the chestnut-crowned babbler have discovered that it uses combinations of different sounds strung together to convey a certain message to other members of the species.

While it is well known that bird songs have different meanings, this is the first time scientists have been able to show that individual messages can be made by using different combinations of the same repertoire of sounds.

The birds’ language is made up of parts much like the phonemes or individual sounds that make up human words, the researchers said.

The research findings, which are published in the journal PLOS Biology, could be an early step in the emergence of the elaborate language systems we use today.

The researchers noticed that chestnut-crowned babblers reused two sounds (“A” and “B”) in different arrangements when performing specific behaviours.

When flying, the birds produced a flight call “AB”, but when feeding chicks in the nest they emitted “BAB” calls.

This was also the case when the researchers switched elements between the two calls: making flight calls from prompt elements and prompt calls from flight elements, indicating that the two calls were indeed generated from rearrangements of the same sounds.

“Although previous studies indicate that animals, particularly birds, are capable of stringing different sounds together as part of a complex song, these songs generally lack a specific meaning and changing the arrangement of sounds within a song does not seem to alter its overall message,” said lead author Sabrina Engesser from the University of Zurich

“In contrast to most songbirds, chestnut-crowned babblers do not sing. Instead its extensive vocal repertoire is characterised by discrete calls made up of smaller acoustically distinct individual sounds.”

“We think that babbler birds may choose to rearrange sounds to code new meaning because doing so through combining two existing sounds is quicker than evolving a new sound altogether.” said co-author Professor Andy Russell from the University of Exeter, who has been studying the babblers since 2004.

“Although this... structuring is of a very simple kind, it might help us understand how the ability to generate new meaning initially evolved in humans” said one of the study’s authors, Dr Simon Townsend.

“It could be that when phoneme structuring first got off the ground in our hominid ancestors, this is the form it initially took.”