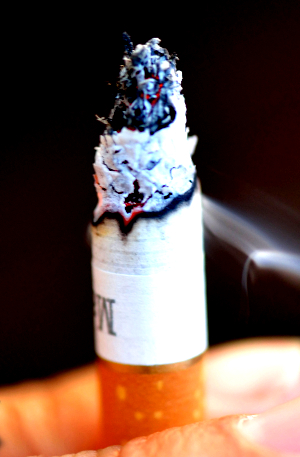 Engineers have developed a chip embedded with lung cells that can simulate the effects of smoking.

The team from Harvard University say they can use the ‘lung-on-a-chip’ to recreate and analyse the effects of smoking at the molecular, cellular, and tissue level to understand the damage it causes.

They are also testing the effects on engineered lung tissues from patients with chronic obstructive pulmonary disease (COPD), the third leading cause of death in the US.

But the approach could be expanded to test the effects of other products, such as e-cigarettes, vapourisers and hookahs.

“These devices are made of a clear flexible rubber the size of a computer memory stick. We call them chips because we adapted computer microchip manufacturing methods to create very small hollow channels that we line with living human cells,” says senior author Donald Ingber.

Bronchiolar epithelial cells are cultured in a top channel, where air can pass over them, and fed through a bottom channel, which acts as a vascular system.

The cells differentiate and specialize on the chips, produce mucus, and develop ‘cilia’; hair-like extensions that beat in concert to push mucus out of airways.

To mimic the behaviour of human smokers, the researchers built a smoking machine to act as a mouth that can take a puff of a cigarette, exhale it, and breathe normal air in and out between puffs.

This connects to the lung-on-a-chip and a microrespirator, which acts as a diaphragm pulling air and smoke across the chip and pushing it out.

Researcher can control, among other variables, how many puffs the smoking machine takes per cigarette and how many breaths between puffs.

In tests so far, the cells on the smoking chip experienced changes in oxidation-reduction pathways and gene expression profiles that matched those found in human smokers.

Using images from the experiment, researchers showed that on chips exposed to smoke, cilia in some areas beat normally but in other areas beat at much reduced rates, providing insights into what happens in smokers' lungs.

By growing cells on chips, “we can take the same patient's lung chip and look at it before and after exposure to smoke, which is a much more direct way to ask specifically; ‘What is the effect of smoke inhalation on the response of the lung?’” says Ingber.