Less is more for hydro-cell improvement 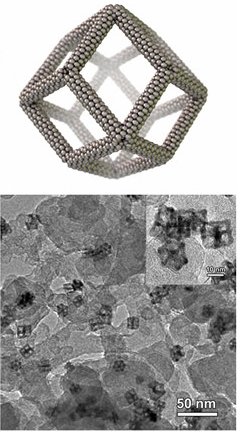 Energy labs in the US have reported a new material for generating hydrogen fuel, cutting the time and cost of the next-generation power supply.

Researchers say they have developed a new class of fuel cell catalysts which are cost-competitive with other generators.

The team has created a catalyst that uses 85 per cent less platinum and has more than 30 times the catalytic activity, making it cheaper and more efficient than conventional catalysts.

When exposed to air for two weeks, the nanoparticles reacted with oxygen, causing the nickel in the particle’s interior to dissolve.

The resulting material forms a dodecahedron nanoframe - a three-dimensional 12-sided hollow structure a thousand times smaller in diameter than a human hair.

The research team then took the nanoframes further by applying heat to form a thin skin of platinum atoms over the remaining nickel.

They also encapsulated an ionic liquid in the nanoframe to allow more oxygen to access the platinum atoms during the fuel cell’s electrochemical reaction..

The new catalysts hold promise for future fuel cell vehicles as well as other applications like stationary and portable power.

In lab tests under conditions simulated to match those in an operating vehicle, such as rapid acceleration, the platinum nickel nanoframes showed no decrease in activity after 10,000 cycles.

More information is available at the Argonne Lab’s website.