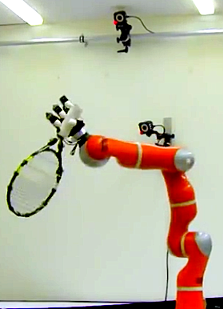 As robots begin to have an increasing presence in our lives, it is likely that they will greatly annoy some people, luckily, researchers are planning for this.

In the future if someone’s anger leads them to throw things at a robot, they may be presented with a disconcertingly good catch.

A robot has been developed which can catch objects thrown at it, making decisions in a fraction of a second and rarely suffering from butterfingers.

The arm measures about 1.5 metres long, it has three joints and a sophisticated four-fingered hand.

It was programmed at the Learning Algorithms and Systems Laboratory at EPFL (LASA) and designed to test robotic solutions for capturing moving objects. It is unique, as it has the ability to catch projectiles of various irregular shapes in less than five hundredths of a second.

The invention is described in an article published today by IEEE Transactions on Robotics, the first journal in the field.

The robotic arm’s first job may be in space.

It has been attached to the Clean- mE project by the Swiss Space Center at EPFL, which aims to develop technologies for the recovery and disposal of space debris orbiting around Earth.

Fitted on a satellite, the arm would have the task of catching flying debris, whose dynamics are only partially known. The robot will be able to work out such dynamics by observing the movement of the approaching objects.

But the arm is not pre-programmed as it would have been in the past.

Instead, it learns with a new technique known as ‘Programming by Demonstration’.

The desired speed and adaptability is achieved not through specific directions to the robot, but instead it is shown examples of possible trajectories. This involves manually guiding the arm to the projected target and repeating several times.

More details are available in the following video;

The research was conducted with a ball, an empty bottle, a half full bottle, a hammer and a tennis racket.

These five common objects were selected because they offer a varied range of situations in which the part of the object that the robot has to catch does not correspond to its centre of gravity. The case of the bottle even offers an additional challenge since its centre of gravity moves several times during its trajectory.

When projected into the air, all the items make even more complex movements, often involving several axes. As a result, when the moving objects are submitted to the robot's abilities, the outcomes are quite interesting.

In the first learning phase, objects are thrown several times in the robot's direction. Through a series of cameras located all around it, the robot creates a model for the objects' kinetics based on their trajectories, speeds and rotational movement.

Scientists translate it into an equation which then allows the robot to position itself very quickly in the right direction whenever an object is thrown. During the few milliseconds of the approach, the machine refines and corrects the trajectory for a real-time and high precision capture. This efficiency is further enhanced by the development of controllers that couple and synchronize the movements of the hand and fingers.