Lasers get deep on graphene discs 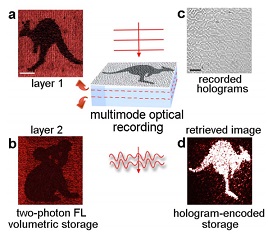 A new storage medium is being developed in Australia which could make blu-ray seem like a floppy disc.

Researchers at the Swinburne University of Technology have created the first graphene-based optical disc – it could provide both an incredible capacity along and high security as well.

To create the new medium; researchers Min Gu and colleagues at Swinburne started with a suspension of graphene oxide (GO) in water. This was mixed with PVA (polyvinyl alcohol), spin-coated on a glass disc, and dried. The end result is a disc covered in a graphene oxide.

The polymer is highly fluorescent in nature but by hitting it with a very specific laser it reflects just the reduced graphene, which is not fluorescent.

At this point, another laser paired with a photodetector to read these non-fluorescent areas is used, completing the reading and writing cycles of a graphene oxide-polymer optical disc.

The recording area of the disc is reportedly so thick that it is possible to encode data on multiple levels – with modulated refractive indexes to allow a new depth of storage capability. The conceptual and highly technical process is known as holographic storage.

Lead researcher on the paper recently published in Nature, Min Gu, says the technology could have even more advantages over current discs.

Gu says: “Conventionally, information is recorded as binary data in a disc. If the disc is broken, the information cannot be retrieved... the new material allows the development of super-discs, which will enable information to be retrieved – even from broken pieces.”

Mass production remains the biggest hindrance to a raft of graphene–based inventions revolutionising our world. As soon as good quality graphene can be extruded at a reasonable price, many astounding creations such as the holographic disc from Swinburne will be brought to the mass-market.