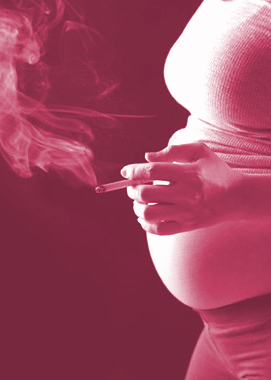 Research has revealed new details on how pregnant mothers’ smoking harms their babies.

Previous studies have shown that maternal smoking is associated with lung under-development, airflow limitation, an increase in the risk of respiratory infections and development of airway hypersensitivity and asthma.

Research by University of Technology Sydney (UTS) scientists has revealed that oxidative stress is the major mechanism by which developing offspring are harmed when cigarettes are smoked during pregnancy.

“Prior to the study, it was thought that nicotine caused most adverse effects on the health of mothers and their offspring,” Associate Professor Brian Oliver said.

“When a person smokes, however, additional toxic chemicals and billions of free radicals (oxidants) are inhaled, enter the blood stream and affect the whole body.

“Free radicals are molecules like hydrogen peroxide (H2O2) that are highly reactive and can chemically change (similar to bleaching) tissues in the body. For pregnant women, the response to these chemicals extends to the developing child,” he said.

The research group’s study also showed that maternal smoking during pregnancy may increase the risk of chronic inflammatory conditions in offspring’s lungs, making them more susceptible to certain pulmonary disorders such as asthma or chronic obstructive pulmonary disease (COPD) in adulthood, an area that has been identified for further investigation.

The research also has implications for pregnant women that live in polluted areas or use electronic nicotine delivery systems. The research team is actively pursuing these areas.