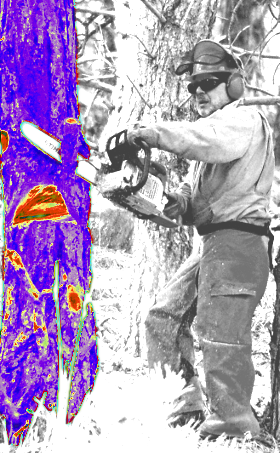 Researchers say the world is experiencing its sixth mass extinction.

Humans and other animals often find the same things beneficial about living in a certain area. This means humans often set up camp in biodiversity hot-spots.

Rubbing shoulders with our wilder relatives has brought more than 500 vertebrate species to the brink of extinction, according to international researchers.

A new study looked at 29,400 species on the Red List of Threatened Species and found that 1.7 per cent, or 515 of them, are approaching extinction.

This is expected to be an underestimate because most species are not monitored. For example, the only long-term monitoring of mammal species for the whole of Australia’s northern savanna and northern desert regions, more than 2 million square kilometres, is on three national parks in the Northern Territory.

Where there is one critically endangered vertebrate species, there are likely to be many.

Additionally, 84 per cent of the 388 terrestrial vertebrate species that have fewer than 5,000 remaining individuals are located in the same geographical regions as species on the brink, and may therefore soon face a similar risk due to the human-driven collapse of regional biodiversity.

Endangered terrestrial vertebrate species have together lost approximately 237,000 populations since 1900.

For Australia, the study shows that the region has the second-highest number of land vertebrates on the brink of extinction, despite being the smallest continent. Only South America has more species on the brink, because of the many critically endangered frogs there.

The world has seen over 400 modern extinctions of land vertebrates, about fifty of which were Australian.

Australia has the worst mammal extinction record in the world. Other studies have found that up to 42 Australian mammals and birds (up to 6 per cent of all species) are expected to be eliminated in the next 20 years if efforts to save them do not improve.

Associate Professor Diana Fisher says; “Conservation efforts do work, and every population can be saved if we want to save them”.

“Dozens of birds and mammals have recovered from tiny populations due to intense conservation effort.

“It is affordable to avoid more species extinctions in Australia - we just need to get our priorities right.”

She pointed to an estimate of the recovery cost for threatened species in 2019 of $1.69 billion per year. This is about half of the amount spent on pet cat care each year.

Dr Amy Coetsee - a Threatened Species Biologist at Zoos Victoria – agrees that it is not too late.

“Whilst we are currently on a devastating trajectory, there is hope, we can reverse the extinction crisis. With strong environmental laws that protect native wildlife, long term investment into threatened species recovery and a renewable energy future, we will save species from extinction,” she said.

“The mainland Eastern Barred Bandicoot is one species that is making a comeback. Once listed as extinct in the wild it has now been returned to live in the wild on Victorian islands.”

In Australia, amongst other actions, the experts say authorities must halt native vegetation clearance, create more effective management of invasive pests, improve the management of the existing conservation reserve system, and take up efforts to restore landscapes beyond reserve boundaries.