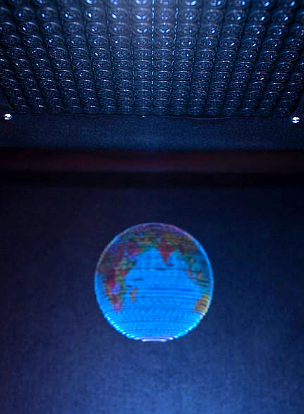 Sci-fi-style holograms are one step closer, with exciting developments from Japanese researchers.

Researchers have developed a device that can create a floating 3D image that not only produces sound, but even responds to touch.

They were able to do this by suspending tiny plastic particles in the air using sound waves, and projecting red, green and blue light onto them; the same colours that are used to make a picture appear on a TV screen.

Because the particles are suspended by sound, it is possible to make the hologram emit sound, and give tactile feedback when it is touched.

Japanese expert Ryuji Hirayama and colleagues created the Multimodal Acoustic Trap Display, based on the principles of acoustic tweezers - where the position and movement of very small objects can be manipulated using sound waves.

The authors have demonstrated their system by producing 3D images, including a torus knot, a pyramid and a globe, which can be seen from any point around the display.

Using the same acoustic fields they produce sound from the displayed content, as well as tactile feedback. For example, they have produced an audio-visual countdown timer that users can start and stop by tapping their finger on the display.

A paper on the device is accessible here, and a video demonstration can be seen below.