High-tech needle to save brains 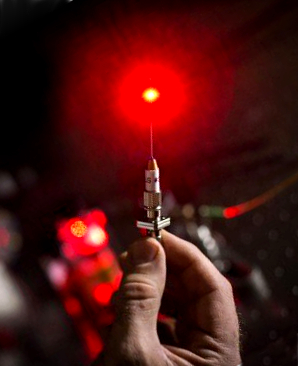 “We call it a smart needle. It contains a tiny fibre-optic camera, the size of a human hair, shining infrared light to see the vessels before the needle can damage them,” says researcher Professor Robert McLaughlin.

“And what’s really exciting is the computer smarts behind this so that the computer itself recognises the blood vessel and alerts the surgeon.”

Over the past six months, the ‘smart needle’ has been used in a pilot trial with 12 patients undergoing neurosurgery at Sir Charles Gairdner Hospital in Western Australia.

Education and Training Minister Senator Simon Birmingham recently visited the lab that developed the high tech needle, which was partially funded by the Australian Research Council, the National Health and Medical Research Council and the South Australian Government.

“This smart biopsy device is an outstanding example of how our investment in research can translate into real benefits for industries and ultimately for Australians,” Senator Birmingham said.

“[The needle’s designers] are improving lives and are exemplars of Australian ingenuity who are leading the world as innovators in medical technology.

The smart needle will be ready for formal clinical trials in 2018.

The team behind it is in discussions with a number of international medical device manufacturers about the possibility of producing the smart needles in Australia.

“We have the engineering expertise and world-class hospitals here, and enthusiasm from the surgeons.”

“To have a tool that can see blood vessels as we proceed through the brain would revolutionise neurosurgery,” says Professor Christopher Lind from the University of Western Australia, who led the clinical trial.

“It will open the way for safer surgery, allowing us to do things we’ve not been able to do before.”