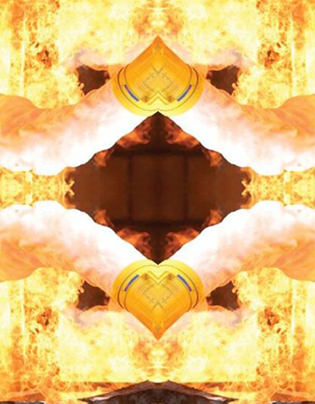 Researchers have unveiled a new kind of fire-fighting foam that becomes stronger as the temperature increases.

Fighting large-scale fires usually involves fire-fighting foams based on synthetic substances, such as prefluorinated surfactants, which are effective but also extremely toxic for living organisms.

It takes over 200 years for many of these substances to biodegrade, and their residues quickly penetrate deep into soil and surface water.

This leads to the accumulation of toxic elements, and so many countries have banned their use or reduced their production, despite the absence of any decent alternatives.

But now, a group of scientists from the International Laboratory of Advanced Materials and Technologies (SCAMT) at ITMO University in Saint Petersburg have devised a foam that features full biodegradability and a fire extinguishing capacity is higher than that of any existing foam currently in use by fire fighters.

After the fire is extinguished, the substance actively absorbs water, softens and falls apart into bioinert silica particles. Even when the foam accidentally enters living organisms, it does not not pose any danger to them.

“Our foam is based on silica nanoparticles, which create a polymer network when exposed to air,” says Alexander Vinogradov, deputy head of the SCAMT laboratory.

“Such a network embraces and adheres to the burning object and momentarily cools it down. At the same time, the foam itself hardens.

“The inorganic origin of this polymer network allows it to resist temperatures above 1000 degrees Celsius, which ensures gigantic stability from the aggressive environment in the midst of a raging fire.”

“Most existing foams are made of organic materials and quickly deteriorate when temperature approaches 300 degrees Celsius.

“In our case, the foam creates a hard frame that not only puts out the fire, but also protects the object from re-ignition. With ordinary foams, re-ignition occurs within seconds after flame is applied to the object again.”

The scientists conducted a series of large-scale experiments of the hardening foam, including the imitation of an actual forest fire.

The foam was used to create a flame retardant belt that was supposed stop the spread of the fire.

The tests demonstrated that the foam easily localises the forest fire seat and can stay active during the whole fire season.

“The flame retardant belt made of our foam will prevent the spread of any forest fire, regardless of its strength and level of complexity,” says researcher Gennady Kuprin.

“We can localise the fire and be sure that the adjacent territories will be safe. This is crucial to organise evacuation works during forest fires, where 9 of 10 people die in our and other countries.”