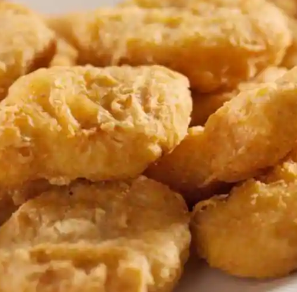 The world’s first lab-grown meat product has been approved for commercial sale.

Singapore has approved the use of chicken cells grown in bioreactors, allowing the production of chicken nuggets that are made of chicken, but were never part of a chicken.

“Chicken bites” produced by the US company Eat Just have been approved by the Singapore Food Agency. It is the first step towards a future in which meat is produced without the killing of animals.

Firms around the world are working on lab-grown chicken, beef and pork products, aiming to produce meat without further exacerbating climate and nature crises, as well and provide cleaner, drug-free meat at a far lower cost than traditional methods.

Eat Just grows the chicken bites are grown in a 1,200-litre bioreactor. They will initially be available in a single restaurant in Singapore. Currently, they are significantly more expensive than conventional chicken, but when production is scaled up, Eat Just says it will be much cheaper.

The cells that began the process came from a cell bank, taken from biopsies of live animals, so at no stage did they require slaughter. The growing cells are fed nutrients from plants.

They are grown in a medium that includes foetal bovine serum, which is extracted from foetal blood before being largely removed before consumption. The company says it will soon switch to a plant-based serum that was invented after the approval process began in Singapore over two years ago.

“I think the approval is one of the most significant milestones in the food industry in the last handful of decades,” says Eat Just spokesperson Josh Tetrick.

“It’s an open door and it’s up to us and other companies to take that opportunity. My hope is this leads to a world in the next handful of years where the majority of meat doesn’t require killing a single animal or tearing down a single tree.”

Global consultancy AT Kearney has predicted that most meat in 2040 will not come from dead animals.