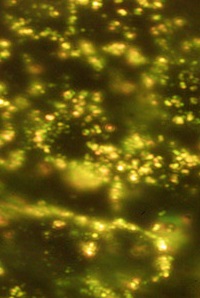 If there is one substance mankind is producing in abundance and looks likely to continue doing so, it would be carbon dioxide – but a new development may see the ability to turn large amounts of CO2 into biofuel.

Researchers in the United States have shown that finely tuned gold nanoparticles can be used to turn carbon dioxide (CO2) to carbon monoxide (CO).

The study in question was aimed to see if shrinking gold down to nanoparticle size might improve previous observations of gold as a catalyst for conversion, it was hoped the smaller size would make it more selective for CO2.

Brown researchers found that the nanoparticles were indeed more selective, but that the exact size of the particles was important. Eight nanometre particles specifically had the best selectivity, achieving a 90-percent rate of conversion from CO2 to CO.

“The work we've done here is preliminary, but we think there's great potential for this technology to be scaled up for commercial applications,” Professor Sun said.

“As we made the particles smaller we got more activity, but when we went smaller than eight nanometers, we got less activity,” said Andrew Peterson, professor of engineering and also a senior author on the paper published in the Journal of the American Chemical Society.

“When you take a sphere and you reduce it to smaller and smaller sizes, you tend to get many more irregular features -- flat surfaces, edges and corners,” Peterson said.

“What we were able to figure out is that the most active sites for converting CO2 to CO are the edge sites, while the corner sites predominantly give the by-product, which is hydrogen. So as you shrink these particles down, you'll hit a point where you start to optimize the activity because you have a high number of these edge sites but still a low number of these corner sites. But if you go too small, the edges start to shrink and you're left with just corners.”

“There's still a lot of room for improvement... We're working on new particles that maximize these active sites,” Peterson said.

“That lowers the cost for making such a catalyst and gives the potential to scale up.”

The team admit that their findings only prompt more research into the highly-complex topic, but it will most likely yield an exciting advance allowing the commercial scale conversion of carbon dioxide to monoxide – at some point.