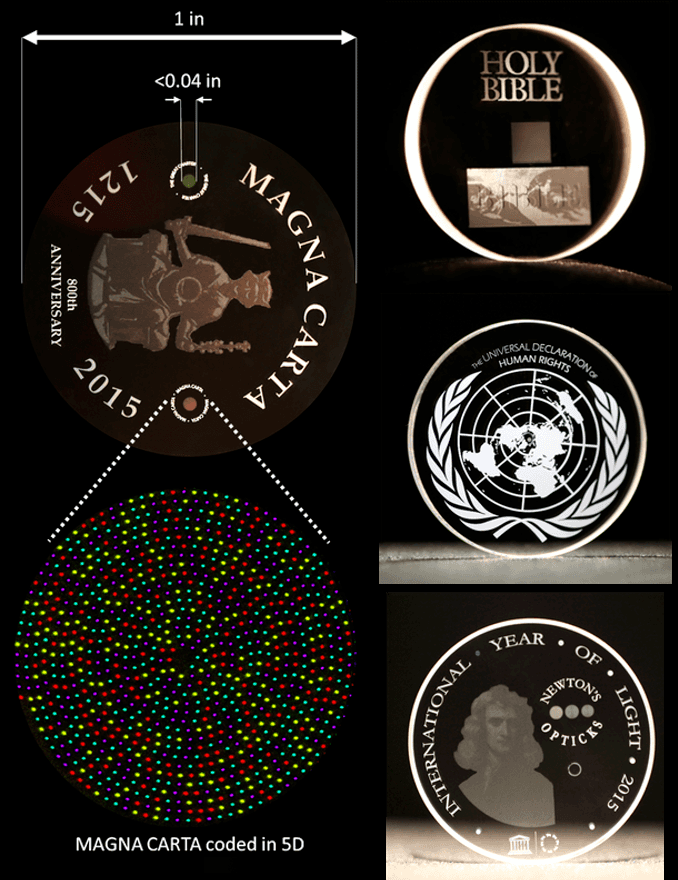 Researchers in the UK have provided an update on the development of a five-dimensional (5D) digital data disc capable of storing 360 terabytes of data for billions of years.

“It is thrilling to think that we have created the technology to preserve documents and information and store it in space for future generations,” said researcher Peter Kazansky.

“This technology can secure the last evidence of our civilisation: all we've learnt will not be forgotten.”

The team from the University of Southampton encodes the discs using a process called femtosecond laser writing.

The small glass discs are hit with an ultrafast laser that generates short, intense pulses of light to write data.

Information is implants in three layers of nanostructured dots separated by 5 micrometres, or 0.005 mm.

But it is not only the position of the dots that are used to interpret the data.

That accounts for the first three dimensions of the 5D system, with the other two coming from the size and orientation of the dot.

The nanostructured data can be read by an optical microscope attached to a polariser, which blocks specific polarisations of light.

The team has already saved copies of the Universal Declaration of Human Rights (UDHR), Newton's Opticks, The Magna Carta and The King James Bible on the discs, and say that earlier tests showed they can withstand temperatures up to 1,000°C.

If they become a commercial product, the discs are likely to be used by anyone that deals with large archives, such as libraries, museums, websites like Facebook or YouTube.

The researchers have presented their work at the the International Society for Optical Engineering Conference in San Francisco this week, and say they are now seeking industry partnerships to help develop the technology further.