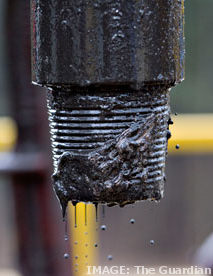 Adding carbon dioxide (CO2) instead of water to fracking fluids could improve the efficiency of gas extraction, new reports say.

Hydraulic fracturing, or ‘fracking’, is a way of recovering fossil fuels (such as methane) trapped in reservoir rocks.

It works by injecting fluids underground at high-pressure, creating tiny fractures through which trapped gas can escape.

Typically the fluids used in fracking consist of water mixed with sand and other additives.

Although supercritical CO2 — a high-pressure state where CO2 is neither a liquid nor a gas — has also been employed in the past, associated costs have limited its use.

A team from MIT in the US used computer simulations and statistical modelling to study shale gas reservoirs at the nanoscale.

Shale gas extraction is common across the American continent, but Australian shale gas reservoirs are still early in their evaluation stage, and they are located in more remote areas than the known coal seam gas deposits.

Even so, given the strong opposition to coal seam gas extraction in Australia, companies looking to engage in shale gas extraction would do well to find the least destructive methods.

The MIT crew modelled the effects of different types of fracking fluids on interactions between molecules of methane and the pore structure of rocks in a reservoir.

They showed that methane recovery is hampered when water is used as a fracking fluid because wet pore surfaces in the rocks surrounding the reservoir act as energy barriers preventing methane molecules from being removed.

They find that this leads to a rapid decline in methane production rate, and note that these results from modelling are in agreement with previous field measurements.

Replacing water with supercritical CO2 eliminates the energy barrier, and no rapid decline in production rates is observed, the authors find.

The full study – funded by Shell and Schlumberger – is accessible here.