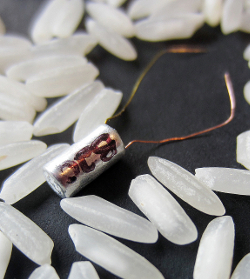 Engineers have created a tiny battery and sensor, no bigger than a grain of rice, which holds enough power to track the long migratory path of salmon.

The new battery has achieved a fine balance between size and power – it is small enough to be harmlessly injected into a fish, yet powerful enough to send readings from an acoustic tag.

For fish-tracking scientists, the lighter battery and smaller transmitter can be inserted into younger, smaller fish. This allows researchers to track salmon welfare for most of their life cycle, focussing on the small streams that are crucial to their beginnings.

The new battery also can send signals over greater distances, allowing tracking of fish deeper underwater or further from the shore.

“The invention of this battery essentially revolutionizes the biotelemetry world and opens up the study of earlier life stages of salmon in ways that have not been possible before,” said M. Brad Eppard, a fisheries biologist with the Portland District of the U.S. Army Corps of Engineers.

A vital part of the design came from materials science expert Jie Xiao.

The team laid down layers of the battery materials one on top of another in a laminating process, then rolled them up together like a well-known Swiss baked treat.

The layers include a separating material sandwiched by a cathode made of carbon fluoride and an anode made of lithium.

The technique allowed her team to increase the area of the electrodes without increasing their thickness or the overall size of the battery, it also keeps impedance to a minimum.

The battery can power a 744-microsecond signal sent every three seconds for about three weeks, or about every five seconds for a month. Researchers say it is the smallest unit with enough energy capacity to maintain that level of signalling.