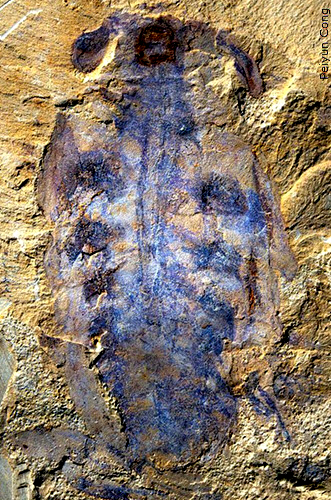 New fossils have shown stunningly well-preserved brain structures from a bizarre bunch of sea creatures which dominated the Earth half a billion years ago.

Several near-complete fossils of the animal Lyrarapax unguispinusis were unearthed in China, and their details are now reported in the journal Nature.

The strange creature is part of an ancient family - the anomalocaridids - whose best-known example is Anomalocaris, from a Canadian fossil site called the Burgess Shale.

Primitive relatives of arthropods such as crustaceans and insects, anomalocaridids hunted prey with a set of grasping claws in front of their eyes.

It has been thought that there are no anomalocaridids descendants alive today, but the brain structures found preserved in stone closely resemble those of velvet worms that live in tropical and semitropical forests of the southern hemisphere.

Researchers say it is possible that velvet worms may be very distant cousins of the anomalocaridids.

Velvet worms, which are also known as onychophorans, grow to a few inches in length with two long feelers extending from their heads. They also have many pairs of stubby, unjointed, tubular legs ending in a pair of small claws.

Its neuroanatomy is quite similar to that of the velvet worm, with a simple brain and a pair of nerve cell clusters placed between the optic nerve and the base of the grasping appendages.

Interestingly, the fossils show that the anomalocaridid brains were noticeably less complex than those of the animals it probably hunted.

There is tragically little information on some of the early Earth’s softer inhabitants, as they decay more easily after death and are only fossilised in very special circumstances.

“Anomalocaridids preserved with the whole body are very rare. None of them have been reported with the brain,” says the paper's lead author Peiyun Cong, a paleontologist at Yunnan University.