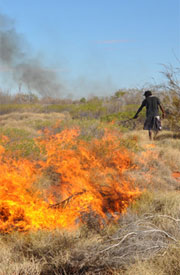 For a long time, Australian Aboriginal cultures were thought to have sole-dominion over the secrets of setting fire to the land they hunt, but scientists are now finding the ancient wisdom with a modern lens.

There have been many studies showing the broad benefits of the burning regimes that propagated land for use by Aboriginal cultures. Burning helps spread seeds, clear ground cover, and force animals into strategic areas.

A new study has shown that ‘patch burning’ by the Martu people in the Western Desert of Australia allows both easier access to sand-dwelling goannas, and encourages goanna reproduction for future food supplies.

The cultural secrets were kept and passed-on through mythology, integrating fire into dreamtime stories.

“The dreaming tells them that the country must be used, lived in, for all the animals and plants within it to prosper,” Dr Bleiege Bird says,

“Animals must be hunted and fires must be set, else the whole thing will collapse.”

The Marta people of Western Australia use fire to hunt the sand goanna during the winter months, when the lizards are hidden in burrows. Fires were lit in mature spinifex grass to clear the ground and identify the occupied burrows. A long stick was then used to rouse the goannas from their homes.

The mosaic pattern of burning created by the practice helped stage the growth and maturity of plants all over the desert, creating niche habitats for a range of species – boosting biodiversity.

A broad variety of inhabitants is normally good for all species, as was the case in goanna populations.

There are an unbelievable amount of lessons to be learned from ancient cultures, such as suggestions from the goanna study that Aboriginal burning could help prevent climate-driven shifts in fire size, and in turn help prevent species from going extinct.

It has also given further evidence to the idea that Australia’s current biological and geological landscapes were formed with the help of Aboriginal burning regimes, and that imbalances in nature have resulted in the time since they have been removed.