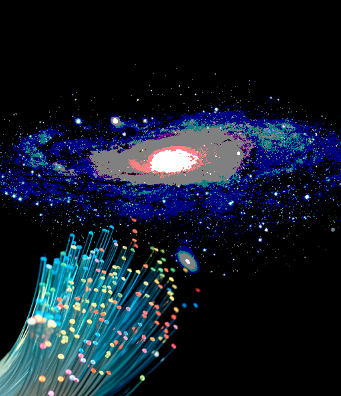 A new device is giving Australian researchers a 'Google street view' of galaxies.

The better view is putting local efforts far beyond international counterparts, and getting many astronomers academically excited.

Bundles of optical fibres are being used to take detailed shots of multiple points in a single galaxy, or even multiple galaxies at once.

“It's a giant step,” says Dr James Allen, from the ARC Centre of Excellence for All-sky Astrophysics (CAASTRO).

“Before, we could study one galaxy at a time in detail, or lots of galaxies at once but in much less detail. Now we have both the numbers and the detail.”

By analysing the lights, astronomers can learn how gas and stars move within each galaxy, where the young stars are forming and where the old stars live. This will allow them to better understand how galaxies change over time and what drives that change.

It puts Australia years ahead of its international competition.

In just 64 nights it has gathered data on 1000 galaxies, twice as many as the previous largest project, and over the next two years it will study another 2000.

Developed by researchers at the University of Sydney and the Australian Astronomical Observatory, the new technique features optical-fibre bundles which can sample the light from up to 60 parts of a galaxy, or a dozen galaxies at a time.

The optical-fibre instrument is called SAMI (the Sydney-AAO Multi-Object Integral field spectrograph), and it has been installed on the 4 metres Anglo-Australian Telescope at Siding Spring Observatory in northwest NSW.

The major technological leap is the ‘hexabundle’; sixty or more optical fibres closely-packed and fused together.

The hexabundle comes from a University of Sydney astrophotonics group led by Professor Joss Bland-Hawthorn.

Using the new instrument, astronomers have already spotted ‘galactic winds’ - streams of particles travelling up to 3,000 km a second - from the centre of two galaxies.

“We've seen galactic winds in other galaxies, but we have no idea how common they really are, because we've never had the means to look for them systematically. Now we do,” said the University of Sydney's Associate Professor Scott Croom.

The researchers are also uncovering the history of galaxies, learning about their formation by judging their rotations today.

“There are hints that galaxies with random motions sit at the centres of groups of galaxies, where many smaller galaxies may have fallen into them,” said Dr Lisa Fogarty, a CAASTRO researcher at the University of Sydney who led the work.

The first set of data from the instrument will be released to the worldwide astronomical community at the upcoming annual meeting of the Astronomical Society of Australia.