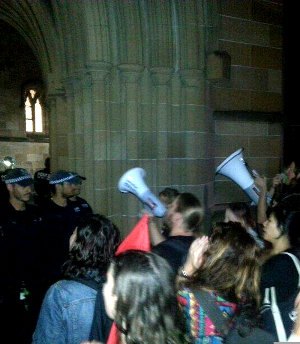 University students continue to vocalise their discontent at planned uni fee hikes, and now one senior academic has changed sides on the debate.

Several dozen police officers were called-in to deal with a similar number of protestors outside the John Howard Debating Cup at the university's St John's College.

Protestors moved back and forth between entrances of the building, trying to find the best vantage point to project their anger to the privileged few inside.

At one point police are believed to have push the mob back out to the footpath of the building, but they made their way back to the doors to continue the demonstration.

The protest has been largely pinned on members of the Socialist Alternative and the National Union of Students, the groups behind nationwide protests against the Coalition's plans to deregulate tertiary education fees.

Sydney University's Liberal Club has lashed out at the demonstration, colourfully labelling it a “riot”.

“This riot was organised by the usual suspects from Sydney University's extremist rent-a-crowd, who have nothing better to do than to disrupt civil debate with their militant tactics,” a post on the Liberal Club’s Facebook page said.

“I'm sure all Australian students stand with me in condemning this unprovoked and violent riot,” the statement quoted the club's president, Alex Dore, as saying.

Professor Webbington says he initially backed the Federal Government’s budget measures, but says he has seen the extent of some fee increases and has joined with those worried about high costs and future debt.

“What we find now is they've announced a set of discipline tiers, as they call them, and so you've got some people like mathematics students will pay less, engineers will pay substantially more, little groups like environment students would pay more than a 100 per cent more than they currently do, it just defies logic.”