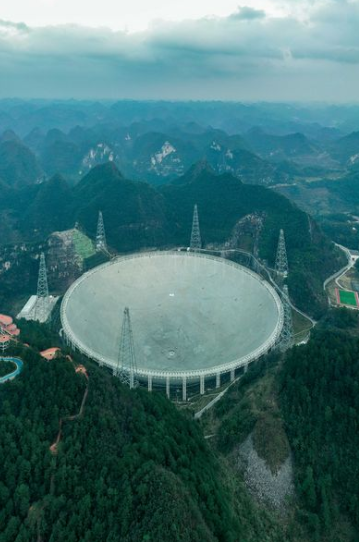 The world's largest and most sensitive radio telescope is ready to run.

The FAST telescope (or Five-hundred-meter Aperture Spherical Telescope) has been built in a natural depression in Guizhou, Southwest China.

Its novel design uses an active surface made of metal panels that can be tilted individually by a computer to focus on different areas of the sky.

Scientists around the world think the telescope will make some major discoveries, especially in its first couple of years.

Its scientific goals include:

In one project, FAST will perform two sky surveys of the course of about five years, with another ten years to analyse all the data. Even so, there is room for flexibility in the telescope's operational schedule, allowing it to pursue any surprises that come up or join other international efforts.

New discoveries came almost as soon as the device was first switched on, known as ‘first light’. The telescope has discovered 102 pulsars in just over two years - more than the total number of pulsars discovered by researchers in the US and Europe during the same time period.

FAST is so sensitive that the timing of pulsars can be measured about 50 times more accurately than before, allowing researchers to measure extremely low-frequency nanohertz gravitational waves for the first time.

The telescope will be operated by the Chinese National Astronomical Observatory, part of the Chinese Academy of Sciences, but the authorities intend to allow international researchers to use the facility.