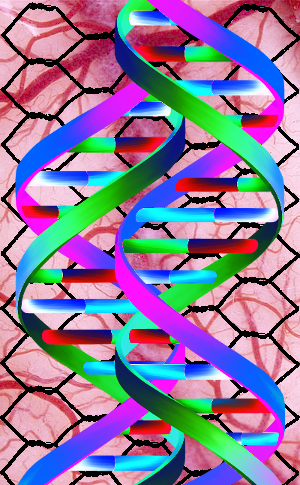 Chicken wire linked on the nano-scale could be the key to real-time, high throughput DNA sequencing, which would revolutionise medical research and testing.

A study featuring local experts from the University of Melbourne, the Australian Synchrotron and La Trobe University has investigated ways to use graphene to detect the four nucleobases that make up DNA (cytosine, guanine, adenine and thymine).

If they can find a way for graphene to be used to electrically sequence DNA, the floodgates would open.

The technique could improve the speed, throughput, reliability and accuracy whilst reducing the price compared to current techniques.

“We found that each nucleobase influenced the electronic structure of graphene in a measurably different way,” said researcher Nikolai Dontschuk from the University of Melbourne.

“When used in conjunction with a nanopore [a tiny hole], a single DNA molecule would pass through the graphene-based electrical sensor - like a single string of beads passing through one section of tiny chicken wire - enabling real-time, high-throughput sequencing of a single DNA molecule.”

The research team’s early experiments have combined electrical measurements of the graphene-based field effect transistors (GFET,) with photoemission spectroscopy at the Australian Synchrotron.

After comparing the experimental and synchrotron results, the team predicted that single-molecule sensing of guanine, cytosine and thymine by bulk graphene devices could be achieved.