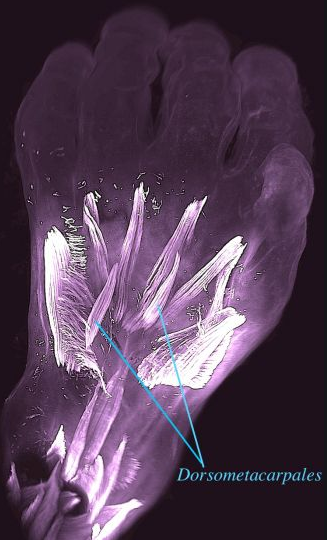 Human embryos have given a new glimpse of our evolutionary history.

Evolutionary biologists have demonstrated that some limb muscles known to be present in many mammals but absent in the adult human are actually formed during early human development and then lost prior to birth.

The findings offer insight into how our arms and legs evolved from our mammalian ancestors, and also help explain rare limb anomalies found in humans born with congenital malformations.

The occurrence of vestigial structures – anatomical structures that have lost their original function – is one of the clearest displays of biological evolution.

For example, ostriches and other flightless birds have vestigial wings, the remnants of functional wings that allowed their ancestors to fly.

Studies of embryonic development have been crucial to understand the occurrence of vestigial structures.

For instance, whales, dolphins and porpoises lack hind limbs, but their embryos initiate and then abort hind limb development.

Researchers have also suggested that vestiges can also be seen within our internal anatomy, including our muscles.

However, it has been difficult to visualise these structures clearly, and the images that appear in modern textbooks are mainly based on decades old analyses. Until now.

In a new study published in the journal Development, researchers used these images to produce the first detailed analysis of the development of human arm and leg muscles.

The unprecedented resolution offered by the 3D images reveals the transient presence of several vestigial muscles - present in other animals but normally absent from the adult human.

“What is fascinating is that we observed several muscles that have never been described in human prenatal development. Some of these vestigial muscles - found in many adult primates but normally absent in human adults - were seen even in 11.5-weeks old foetuses, which is strikingly late for a vestigial muscle,” said study author Dr Rui Diogo.

“Interestingly, some of the vestigial muscles are found on rare occasions in adults, either as anatomical variations without any noticeable effect for the healthy individual, or as the result of congenital malformations.

“This reinforces the idea that both muscle variations and pathologies can be related to delayed or arrested embryonic development, helps to explain why these muscles are occasionally found in people, and provides a fascinating, powerful example of evolution at play.”