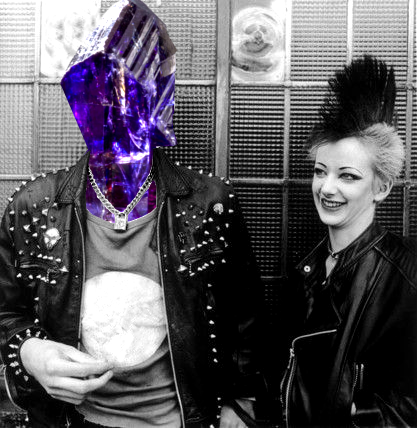 Researchers and engineers love crystals, the majestic paragons of order and strength, but some scientists say the world should get more comfortable with the disorder and chaos of the ‘anticrystal’.

Crystalline materials are defined by the repeating patterns their atoms and molecules make, whereas the anticrystal is a theoretical solid that is completely disordered.

This is because the mechanical properties of even a slightly disordered solid can have more in common with an anticrystal than a perfect crystal.

Understanding these properties is critical for modelling how materials will respond to stress, as well as for designing new materials and predicting their behaviour.

It says that imperfection may be a better place to start.

Outside of extremely controlled conditions, no real crystal is perfect; there are always places of disorder within the overall pattern, which are known as defects.

However, when describing the behaviour of a crystalline material, scientists begin by treating it as if it were a perfect crystal, then extrapolating from that point based on how prevalent its defects actually are. Knowing the exact shape and location of each defect isn’t necessary.

Non-crystalline, or amorphous, materials may have regions within them that have atoms in different repeating patterns but no overarching order. This means that the properties of glass or plastic cannot be inferred from a perfect crystal, but. working from the other end of the spectrum, a perfectly disordered solid, had not been feasible.

“In the last decade or so,” Professor of Physics Andrea Liu said, “many researchers have shown that all of those different ways of being totally disordered do have something important in common, like how likely you are to draw a certain hand even given all of the ways you can shuffle a deck of cards.”

“We now understand that, for a certain class of interactions, there is a starting point for understanding why different glasses have similar properties,” she said.

“It’s the phase transition that occurs when a fluid becomes a disordered solid under pressure, which we call the ‘jamming transition.’”

“Anytime you have a critical point like a phase transition, studying the details really close to that transition tells you about how systems further away from the transition behave,” Goodrich said.

By extrapolating away from the jamming transition, the researchers showed that even fairly orderly materials exhibited behaviours closer to those of the anticrystal than a perfect crystal.

“It takes seven shuffles to totally randomize an ordered deck. But suppose you just shuffle it once,” Goodrich said.

“What we’re saying is that, when it comes to a materials’ mechanical behaviour, even this deck is closer to being totally shuffled than totally ordered.”

“Fifty-two is a large number when thinking about permutations,” Liu said, “but it’s not anywhere close to Avogadro’s number and the different ways all of the atoms in a piece of glass can be arranged.”

Having a better starting point for glass or plastic would be a boon to both research and industrial design, but the principles of the anticrystal are powerful because they can provide insight into many crystalline materials as well.

Making alloys like steel stronger often involves making their crystalline patterns smaller and smaller, meaning their behaviours are better and better described by the anticrystal.

“The anticrystal has well defined properties, and we can think of real materials as being somewhere in between the two,” Liu said.

“What we’ve shown is that it doesn’t take much disorder before the anticrystal is a better starting point.”