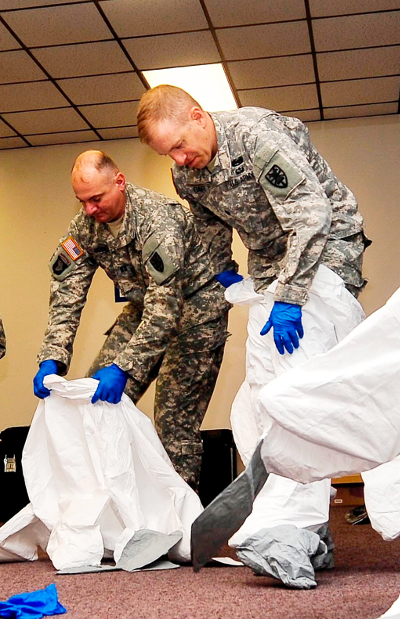 Australia's Foreign Minister has read out a statement criticising nations that block entry for travellers from Ebola-affected countries, like Australia.

Foreign Minister Julie Bishop is currently the chair of the UN Security Council, which met over the weekend to discuss the West African Ebola outbreak.

The meeting came just a few weeks after Immigration Minister Scott Morrison announced that Australia would close its doors to people from outbreak nations due to concern that the disease would spread.

The UN Security Council statement acknowledged that “appropriate screening measures” were needed to monitor new arrivals, but “trade and transport” links must be kept alive.

Ms Bishop expressed concern on behalf of world leaders over “acts of discrimination against the nationals of Guinea, Liberia, Mali and Sierra Leone”.

Some believe that Australia’s response is exactly that kind of discrimination.

The Immigration Department wants to stop the virus from reaching Australian shores through strict health checks at airports and strong border controls.

“These measures include temporarily suspending our immigration program, including our humanitarian program,” Immigration Minister Scott Morrison told Parliament in October.

“This means we are not processing any application from these affected countries.”

The ban remains in place.

Governments of the UK, US and China are among those to have dedicated thousands of troops and medical emergency teams to the Ebola outbreak in West Africa.

The Australian Government has contributed $42 million so far, $20 million of which has been given to private contractor Aspen Medical for a 100-bed Ebola treatment clinic in Sierra Leone.

Speaking over the weekend, Aspen Medical co-founder and chairman Andrew Walker said the hospital should be ready to take patients by early December.

“We will go in very early and, as soon as we can, start delivering services,” he said.

Dr Walker said that while 900 people had applied to be deployed to Sierra Leone, the hospital only needs a staff of about 380 people.

Around 20 per cent of those 380 will be Australians, with other workers to be sourced from Sierra Leone and neighbouring regions.

“At the end of the day we're looking for a cost-effective solution as well,” he said.

“We need to make sure the Australian Government money is spent appropriately and therefore the mix of staff that we put together will be one that optimises both clinical outcomes, and also cost of delivery.”

Back at the UN meeting, special envoy on Ebola David Nabarro said that the overall number of infections is still increasing, but the rate has slowed.

But he warned against complacency, saying; “The longer the Ebola outbreak continues, the greater the impact on the affected countries and the greater the chance of it spreading to other nations.”

“If we take our eye off the ball, case numbers will climb again and we all count the cost,” he said.