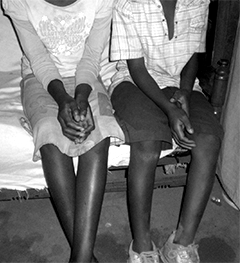 Reports on a sexual violence educational program in Kenya suggest attitudes can be changed.

In a country where rape and violence are rampant, a short educational program produced lasting improvements in teenage boys’ and young men’s attitudes toward women, a study from the Stanford University School of Medicine has found.

The boys and men in the study also were more likely to try to halt violence against women after participating in the program.

The program was developed by No Means No Worldwide, a nonprofit organsation that works in the slums of Nairobi to prevent sexual assault on girls and women.

The group has a curriculum for males aimed at changing attitudes that lead adolescent boys and young men to think it is acceptable to assault their female peers.

“The curriculum for these young men is centred on getting them to think about what kind of people they want to be... it's about really getting them invested in why they need to step up and care about violence toward women: it affects their mothers, sisters and girlfriends,” said Stanford’s Dr Jennifer Keller.

At 29 high schools, 1,250 of them received six two-hour educational sessions from No Means No Worldwide.

The intervention focused on helping them recognise the cultural normaliszation of violence against women, and gain skills and courage to stop it.

Topics of discussion included myths about women, negative gender stereotypes, when and how to safely intervene if you see someone else acting violently toward a woman, and what constitutes consent to sexual activity.

“If you think that when you take a woman out to dinner, she owes you something, you may believe that consent is different than it actually is,” Keller said.

“The instructors and young men talked about understanding what true consent is and how to get that consent.”

There was also a control group, which received Kenya's usual two-hour life-skills class.

The researchers used anonymous surveys to ask the participants in both the experimental and control groups about their attitudes toward women, their endorsement of rape myths, whether they had witnessed verbal harassment, physical threats or physical or sexual assault of women, and whether they had successfully intervened to stop such harassment, threats or assault.

At the start of the study, participants in both groups reported negative views of women and agreement with myths about sexual assault, although the views of the control group were slightly better than those of the experimental group, possibly because they were slightly younger.

After the classes, the experimental group had more positive views toward women and less belief in rape myths, and the improvement persisted 4.5 and nine months later.

The comparison group had unimproved or worsened attitudes toward women at a nine-month follow-up.

Similar numbers of participants in both groups witnessed verbal harassment and physical or sexual violence against women, but those in the experimental group were at least twice as likely as those in the comparison group to successfully halt such assaults. Within the experimental group, participants with the most positive attitudes toward women were the most likely to step in.

“It's very exciting that this was done in Kenya, that even in this setting with high levels of violence toward women we were able to make such an impact,” Keller said.

The study has been published in the Journal of Interpersonal Violence.