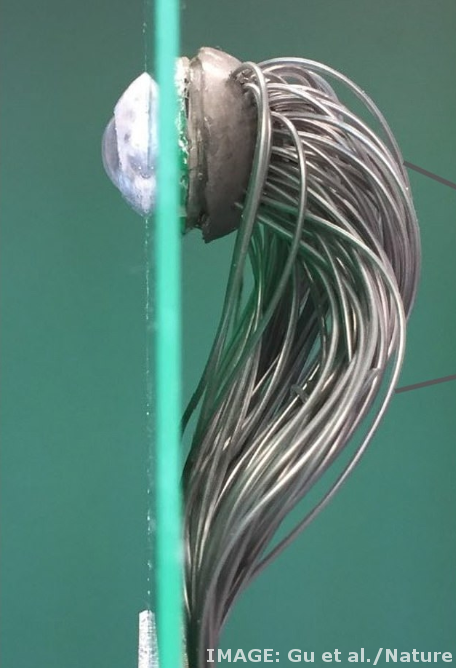 An international research team has created an artificial eye which mimics the shape and composition of the human retina.

The designers say the biomimetic eye has the potential to achieve high image resolution that could have applications in robotics and scientific instruments.

Human eyes have a wide field of view, excellent resolution and are highly sensitive to light, all as a result of the domed shape of the retina and the vast numbers of photoreceptor cells — around ten million per square centimetre.

Recreating synthetic eyes that mimic these characteristics is of interest to the field of robotics and for the development of prosthetic visual devices.

However, the shape and composition of the retina makes it challenging to fabricate an artificial analogue.

The new design by researchers from the Hong Kong University of Science and Technology is called the ElectroChemical Eye (EC-Eye).

It consists of a hemispherical artificial retina containing densely packed, light-sensitive nanowires made from a perovskite — a promising material for solar cells — which mimic the photoreceptors of the human eye.

It uses a lens to focus light onto the dense array of light-sensitive nanowires. Information is then passed through the wires, which act like the brain’s visual cortex, to a computer for processing.

Studies have already shown that the device – when connected to a computer - can ‘see’ by reconstructing images (the letters ‘E’, ‘I’ and ‘Y’) viewed by the artificial eye.

The proof-of-concept device has low resolution because the array consists of just 100 pixels (each pixel has three nanowires). However, the authors propose that their design has the potential to have even better resolution than human eyes, as it is possible to increase the density of nanowires to more than ten times that of photoreceptors in the human eye.

This means that one day, a human user of the bionic eye could see smaller objects at a further distance, and may even gain night vision capabilities.

“Biological eyes are arguably the most important sensing organ for most of the animals on this planet,” the researchers wrote in a paper describing the breakthrough.

“Mimicking human eyes, artificial vision systems are just as essential in autonomous technologies such as robotics. Particularly for humanoid robots, the vision system should resemble that of a human in appearance to enable amicable human–robot interaction, in addition to having superior device characteristics.”