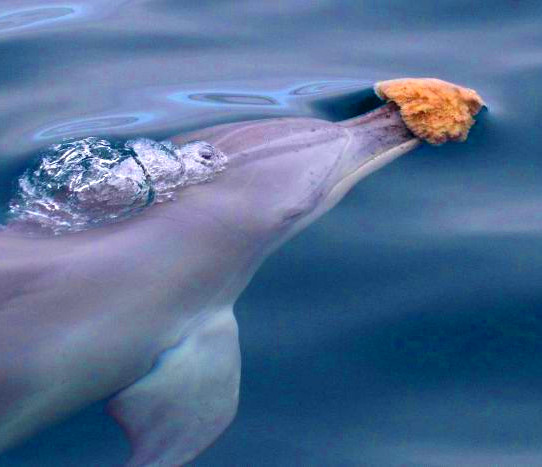 Australian researchers have discovered details of the dating lives of dolphins.

The males were seen ripping the gifts off the ocean floor and tossing them about, in a move the experts say could be a demonstration of affection and strength.

“It could be gift-giving in the sense that humans do it,” said Dr Simon Allen from the University of Western Australia's School of Biological Sciences.

“In order to impress a female or to suggest that he is somebody that would be a really wise idea to mate with.

“It appears the females tend to be ignoring the male and then it kind of ramps up to the point where he's a bit frustrated and he tosses the sponge in the direction of the female.”

“Prior to or after a sponge presentation we have also heard a trumpeting sound coming out of the blowhole, which was completely unexpected,” he said.

“I guess if you're trying anything to impress a lady then that's the way to go.”

The use of sponges was initially discovered by accident, but has now been studied in detail.

Dr Allen said it is difficult to tell whether the behaviour is meant as a threat to coerce females into mating, or as a display of strength designed to impress them.

“We know that the sponges are firmly fixed to the sea floor,” he said.

“They have to withstand things like 10-metre tides in the Kimberley … so it would require some strength to take the sponge from the sea floor, and of course they don't have opposable thumbs or even hands.”

Dr Allen said researchers hope to find out whether the efforts of the male have been successful.

“We would really like to get some more data and work out whether or not these adult males who engage in these multi-modal sexual displays are fathering more offspring — the key test to whether this is a great strategy,” he said.