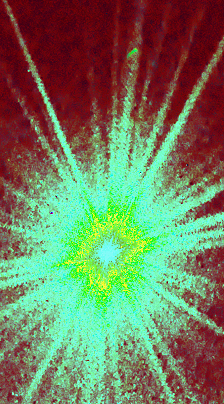 Australian researchers have made a single tiny diamond shine with ‘superradiance’ at room temperature.

A team at Macquarie University is investigating ways to create superradiant nanodiamonds, whose mind-bending quantum behaviour could have a range of important applications.

Superradiance is caused by defects in the crystal lattice of the diamond – similar to the process that gives coloured diamonds their hue.

In this case, nitrogen atoms neighbouring vacant sites within the repeating carbon structure work together – in unison like a well-coordinated orchestra – to create superradiance, a faster and brighter burst of light would otherwise be possible.

Superradiant nanodiamonds have potential applications in all sorts of devices, such as minute compasses for navigation, in biomedical imaging and improved solar cells.

To date, these ideas have been held back because superradiance has previously only been seen at very low temperatures or in very large samples. The new study is the first time it has been seen in diamonds.

Research leader Dr Thomas Volz says the team are now keen to make brighter nanodiamonds that can be used in biomedical applications, such as to track drug delivery pathways in the lab.

“You can attach drugs to nanodiamonds, and then use the concentrated pulse of light sent out by the nanodiamond to track where the drug is going in the sample,” he says.

Nanodiamonds that send out a brighter burst of light will be more easily picked up by the detector, and tiny diamonds are much less toxic that some of the other drug markers we use today.

They act like tiny and very sensitive compass needles and will emit more or less light depending on how they are aligned with the Earth’s magnetic field.

When the nanodiamonds are producing brighter pulses of light this effect is amplified.

This behaviour could be used to develop magnetic sensors which would work out the location of an aircraft for example, by mapping where it is in relation to the Earth’s magnetic field rather than by satellite.

In the future they could be used to create better solar cells, by reversing the superradiance effect so that the nanodiamonds absorb more light, more quickly.

The team has already shown the potential for nanodiamonds to be used as ultra small scanning sensors to look at the processes going on inside living cells.

In a paper published last year in Nature Physics they showed that superradiant nanodiamonds (which are as small as one thousandth of the breadth of a human hair) can be better trapped and moved around using focussed laser light or tiny optical tweezers than non-superradiant ones.

The latest paper is accessible here.