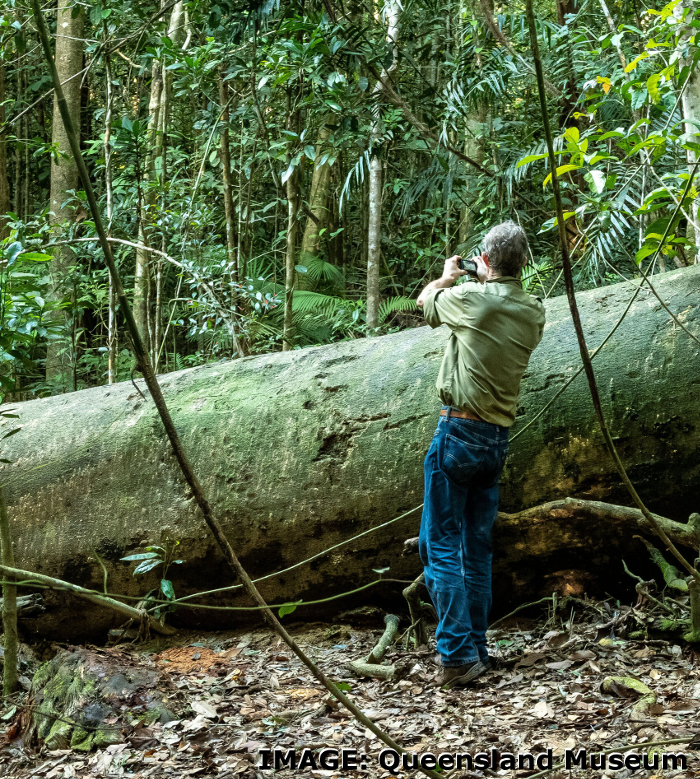 The rare and endangered dendroglyph, a symbolic scar tree of the Traditional Owners from Western Yalanji in Far North Queensland, was at risk of being destroyed during the wet season after the host yellow walnut tree died from a fungal and insect infestation in late 2018.

“The Western Yalanji dendroglyph is a significant part of Australia’s archaeological record and it was devastating to hear the tree had succumbed to infection,” Minister for Arts and Minister for Science Leeanne Enoch said.

“It is thanks to this dedicated group that the carving has been preserved for future generations.

“While the tree has fallen, the carving has been preserved so that this culturally significant story can live on for future generations.”

The group embarked on an epic journey involving helicopters, a four hour trek through challenging terrain to access the dendroglyph, located in remote rainforest of the Mt Windsor Tablelands in North Queensland.

The two methods included photogrammetry (the science of making measurements from photographs), led by Queensland Museum and BHP’s partnership called Project DIG and a fibreglass and latex mould, a method developed by Gordon Grimwade and managed by Western Yalanji Aboriginal Corporation (WYAC).

“The team were able to capture these images in very challenging physical conditions and upon return to the museum have been able to digitally ‘stitch’ together the images using software to form a 3D model of the dendroglyph,” Dr Thompson said.

“The dendroglyph will now be part of Queensland Museum’s digital collection through Project DIG, a museum partnership with BHP to digitally unlock the Museum’s collection for researchers, students and visitors worldwide.”

“This particular tree was one of the largest species in the Wet Tropics and was protected from logging activities by the Department of Forestry and Traditional Owners in the past, so to see it die from an insect and fungal attack was quite devastating,” he said.

“One of the reasons why we embarked on this mission was to lead and show other Traditional Owner groups how they can preserve and protect their cultural assets and especially teach their younger generation of their significant cultural sites.”

BHP Asset President Elsabe Muller said that her organisation was proud to be involved in the initiative and support the technology which will set a benchmark for digital preservation of culturally-significant assets of Indigenous Australians.

“Examples of technological innovation being used to preserve ancient culture, like the dendroglyph, are fundamental to Project DIG and aligned to our Charter Value of Sustainability,” she said.

“In partnership with the Queensland Museum, we will continue to support the way that global communities’ access museum collections, to help scientists of today and tomorrow unlock solutions to global problems.”

The institutions are working on joint research papers comparing the results of the two methods to assist in future preservation works of Indigenous scar trees.