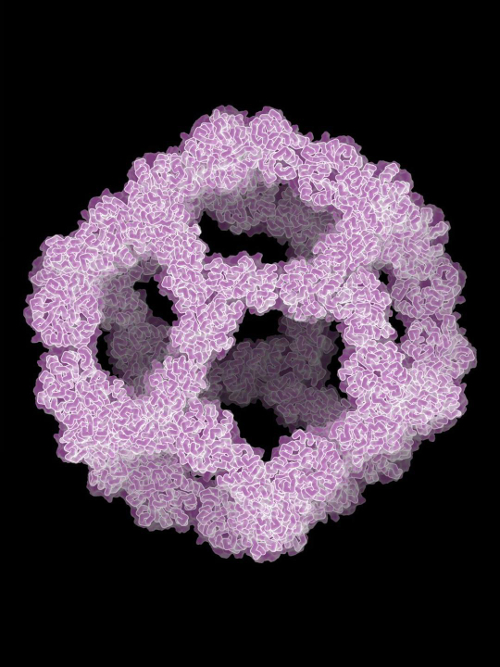 Biological engineers are developing a programmable protein that could deliver next-generation drugs.

University of Washington Institute of Protein Design scientists are working on a 20-sided solid protein that could one day ship cargo into living cells, or even build small chemical reactors.

The design is lifted from the natural ability of viruses that, en route to living cells, transport their genomes inside protective icosahedral (20-sided) protein shells.

These delivery packages, known as ‘viral capsids’, are formed to be tough enough to withstand the trip, efficiently use storage room, and break apart to release their contents when conditions are right.

The researchers' have completed computational design and even some experimental testing of the highly stable icosahedral protein nano-cage.

Engineered at the atomic level, the nano-cage can construct itself from biochemical building blocks and information encoded in strands of DNA.

After selecting the design for the icosahedral nano-cage through computer modelling, the researchers produced it in bacteria.

Observations through electron microscopy confirmed that the particles were nearly identical to the design model.

“The ability to design proteins that self-assemble into precisely specified, robust, and highly order icosahedral structures,” the researchers say, “would open the door to a new generation of protein containers with properties custom-made for applications of interest”.

Applications include fabricating nanoscale icosahedral vehicles - create tiny, spacecraft-like devices that could encapsulate and deliver therapies directly to specific types of cells, such as cancer cells.

The icosahedron, while sturdy, can disassemble and reassemble itself under certain environmental conditions, which would be crucial if it is used to carry and deliver a biochemical payload.

The researchers even designed barriers for the centre of each of the twenty faces of the icosahedron. These could block molecules from entering and leaving the cage. In future iterations, gated cages might be filled to carry a medication into particular kinds of cell and then discharge it.

The latest report is accessible here.